Punjab Election: In its latest video shared on Twitter, the Congress took inspiration from the Hollywood superhero movie 'Avengers: Infinity War' to campaign for the upcoming Punjab assembly elections. 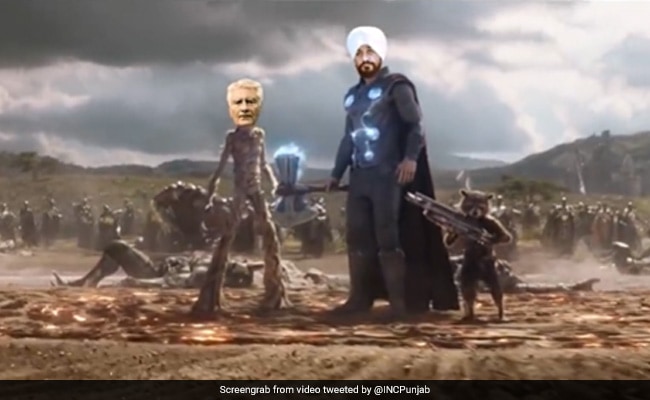 Amid a ban on roadshows and rallies for next month's assembly elections in five states due to the pandemic, political parties are pulling out all stops to ace the online campaign war. This time, the Congress has chosen to portray Chief Minister Charanjit Singh Channi as superhero Thor, a character based on the Marvel Comics.

In its latest video shared on Twitter, the Congress took inspiration from the Hollywood superhero movie 'Avengers: Infinity War' -- starring Chris Hemsworth, Mark Ruffalo, Chris Evans and others -- and superimposed Mr Channi's face on Thor's, a character based on the god of thunder and lightning in Norse mythology.

We will do whatever it takes to redeem our beloved state from the clutches of evil forces working against the interest of Punjab and its people. #CongressHiAyegipic.twitter.com/6lVxqkN4VC

Using a famous war scene from the movie, Congress leader Rahul Gandhi has been portrayed as Bruce Banner aka The Hulk while Navjot Singh Sidhu has been likened to Captain America -- both superhero characters from the original movie.

The Avengers franchise and the Marvel Cinematic Universe have a huge fanbase in India, especially among the youth, which the Congress has tried to bank upon this election season.

The clip also shows the faces of Prime Minister Narendra Modi and Delhi chief minister and Aam Aadmi Party leader Arvind Kejriwal swapped with those of the characters of aliens, portraying them as the enemy.

Former Punjab chief minister Captain Amarinder Singh who has floated his own party, the Punjab Lok Congress, and Shiromani Akali Dal (SAD) chief Sukhbir Singh Badal have also been portrayed as evil aliens in the clip.

The video, with the Marvel theme song playing in the background, begins with Mr Channi's entry as Thor slashing the throats of several aliens using the 'Stormbreaker' -- an axe-shaped weapon used by the character in the movie -- and coming to the rescue of his fellow party members.

"We will do whatever it takes to redeem our beloved state from the clutches of evil forces working against the interest of Punjab and its people," tweeted the Punjab Congress along with the video and hashtag #CongressHiAyegi (Only Congress will come to power).

The clip also shows Mr Gandhi shouting "you can no longer be saved" as a war cry in Punjabi language as his character gears up to fight.

The video, shared widely on social media, ends with Mr Channi and others running towards the enemies with their weapons and killing them.

Recently, the Aam Aadmi Party had shared a clip edited from a Bollywood song 'Mast Kalandar' and the faces of the actors were swapped with those of the rival party leaders.

Punjab's next CM is in the house!#AAPdaCMpic.twitter.com/E2EIcxwVep

Punjab will go to the polls in a single phase on February 20 with counting of the votes slated on March 10.

The Election Commission has banned election rallies and roadshows till January 22 for the five states holding elections from next month - Uttar Pradesh, Punjab, Uttarakhand, Manipur and Goa - due to a surge in coronavirus cases in the country.