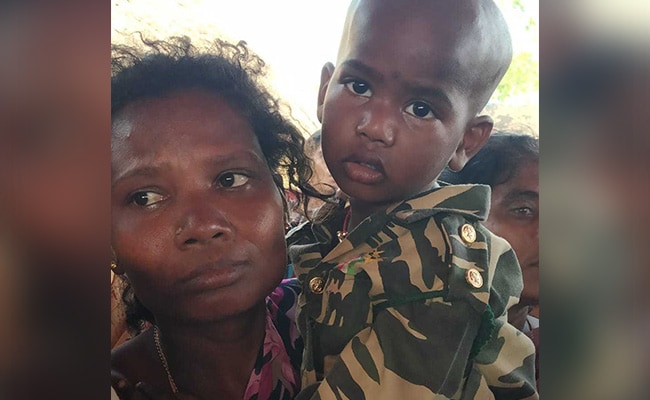 Two-year-old Sivamuniyan, son of C Sivachandran, the soldier who was killed in Pulwama terror attack on Thursday, looked puzzled as hundreds including Defence Minister Nirmala Sitharaman, paid their tribute before bidding his father final farewell. Sivamuniyan can hardly understand why he saluted and kissed the coffin draped in tricolour. His mother, Gandhimathi, pregnant with her second baby, held Sivamuniyan, wearing his father's uniform, close to her chest.

The little boy, probably prompted by his father's colleagues, perhaps would remember Sivachandran only in a photograph. Dressed in customary silk sari, Gandhimathi was inconsolable. Her husband had gone back to his posting in Jammu and Kashmir just last Saturday. He was on a vacation, which he also used for a pilgrimage to Sabarimala Temple. Gandhimathi is a qualified nurse. Her family and the local community wanted the government to give her a secure and well paid job. The Tamil Nadu government has announced Rs 20 lakh as relief and a government job to a family member.

Sivachandran's father, Chinnayan can hardly believe what happened. Two years ago he had lost his younger son in an accident at his workplace in Chennai. Wearing an old uniform of his son, he sobbed uncontrollably, recollecting how his son stood for unity.

In a corner sat the soldier's sister, Jayachitra, with with tears streaming down her cheeks. She has a speech and hearing impairment. Her brother, Sivachnadran used to take care of all her requirements. Now her future looks bleak, say relatives.

It was Sivachandran, who worked tirelessly for the economic stability of the family and was successful in a short span of time. Till he joined the CRPF, the family used to stay in a hut, when Sivachandran, with a Masters and a B.Ed degree taught at a local school. He joined the CRPF in 2010 and after that built a concrete house and gave his family the much needed financial stability.