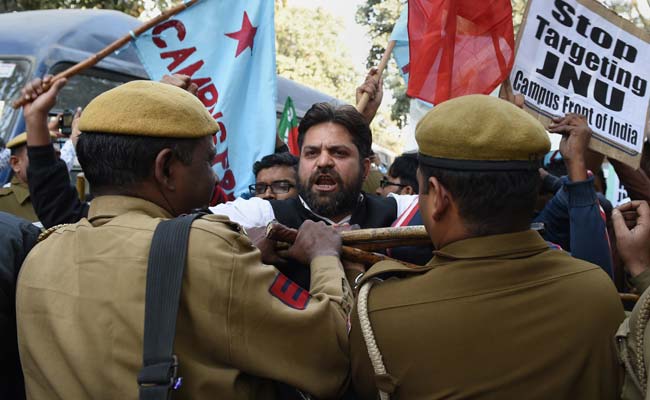 Students and activists protest outside the office of Human Resource Development Minister Smriti Irani against an attack on Jawaharlal Nehru University (JNU) students in New Delhi on February 16. (AFP Photo)

New Delhi: Thousands of angry students marched through the streets of New Delhi on Thursday demanding the release of a PhD student who was arrested and charged with sedition here last week.

The marchers carried flowers, placards and banners with the image of the arrested student, Kanhaiya Kumar, and accused the government of muzzling dissent and campus activism. After a week-long standoff between the government and the students and teachers of the prestigious Jawaharlal Nehru University (JNU) in New Delhi, protests spread Thursday to several other Indian cities as well.

Kumar, president of the JNU Students' Union, was arrested because officials said he was present at a campus event where masked men shouted slogans about breaking up India into pieces.

Members of the ruling Bharatiya Janata Party (BJP) have accused the university of harboring anti-national dissidents.

"We are not protesting just to save Kanhaiya Kumar. The battle is bigger than that," said Seemi Zafar, a PhD student in social medicine at JNU. "I am marching to save the university culture that encourages you to raise difficult questions about nationhood, discrimination and injustice. That does not make students anti-national traitors. We want universities where we can freely discuss everything."

The debate has been so polarizing that earlier this week a BJP lawmaker, O.P. Sharma, and some lawyers assaulted protesting JNU students at a city court. On Wednesday, lawyers also punched and threw stones at Kumar when he was brought to court. The lawyers had also assaulted several journalists at the court this week.

On Tuesday, eminent scholars and intellectuals from around the world, including philosopher Noam Chomsky, Nobel laureate Orhan Pamuk, Columbia University professor Sheldon Pollock and filmmaker Mira Nair, issued a statement of "heartfelt solidarity" with the JNU students and faculty.

"We not only condemn the culture of authoritarian menace that the present government in India has generated, but urge all those genuinely concerned about the future of India and Indian universities to protest in wide mobilization against it," the statement said.

On Thursday, the government of Prime Minister Narendra Modi ordered all federally funded university campuses to fly the national flag daily - "prominently and proudly" - on a 207-foot pole.

Public outrage was also fueled after video of the anti-India slogans at JNU was shared widely on social media and by WhatsApp messages. At least two online petitions are calling for an end to public funding of JNU. Several student groups have also protested against the incidents at JNU.

"The national sentiment is one of anger against these speeches at JNU," said Rohit Chahal, a college student and former national secretary of a students' union affiliated with the ruling BJP. "How can they talk so openly about bringing ruin to India and breaking it into pieces? We are not against JNU, but it is these slogan-shouting students who are bringing disrepute to JNU."

Kumar had told the city magistrate that he did not support the inflammatory slogans and that he went to the event to mediate between two clashing groups. On Wednesday, Kumar released a statement: "I believe in the Indian constitution and I will abide by it. I also believe in India's unity and diversity and do not support any unconstitutional activities."

On Friday, a city court will hear Kumar's bail application.

The controversial event at JNU on Feb. 9 was organized to commemorate the anniversary of the hanging of a Kashmiri man convicted of helping militants mount an armed attack on the Indian Parliament in 2001.

Kumar's arrest has now become a new rallying cry for critics of the shrill brand of nationalist politics propagated by Modi's BJP. More than 50 protesting students were arrested in the southern city of Chennai on Thursday, and dozens of university campuses across India are planning week-long protest events.

At JNU, many students and teachers have boycotted classes this week. Daily debates on nationalism are being conducted by protesting professors in open classrooms on the JNU campus.

"Many Indians have differing views on what a nation is. You cannot force a single view down their throats," said Nandita Narain, president of the Delhi University Teachers' Association. "Don't muzzle them and call them anti-national just because they are in the habit of questioning everything. Don't declare a war on intellect."