Protest outside Supreme Court against Chief Justice of India Ranjan Gogoi: The police banned the gathering of any large group at the area in central Delhi 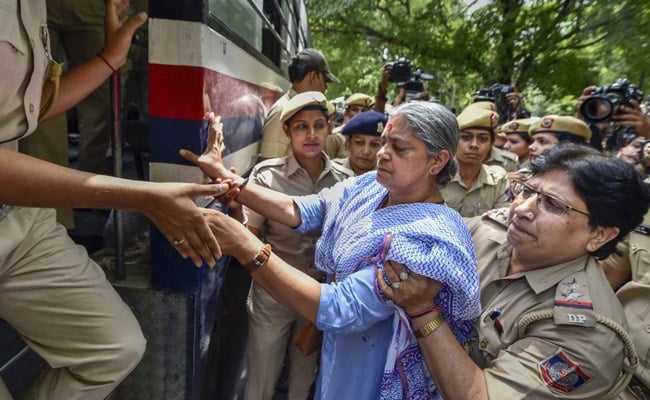 The police banned the gathering of any large group at the area in central Delhi's Lutyens' Zone. Amid noisy scenes, some of the protesters courted arrest.

"Procedure seems to be totally unjust... Why can't the victim be given the report? It's wrong. When they are dismissing the matter, more questions are being raised about the procedures adopted by the Supreme Court. It's injustice," said CPI(M) leader Brinda Karat.

"Transparent and fair due process is a must," read one of the placards carried by the protesters, while another read, "Supreme injustice".

"We were not allowed to protest even for five minutes. First the Supreme Court allows a farce process and then can't even accept any criticism. Rule of law died thousand deaths," lawyer Amritananda Chakravorty tweeted.

The in-house committee on Monday ruled that there was "no substance" in the allegations by a former Supreme Court employee against the country's top judge.

The panel, which includes Justice SA Bobde, Justice Indira Banerjee and Justice Indu Malhotra, also said its report was "not liable to be made public". This means the inquiry report will not be shared with the complainant.

The protesters who gathered outside the Supreme Court today demanded the report should be shared with the complainant.

The woman, who had dropped out of the inquiry after three hearings, said "gross injustice" had been done to her and she was "dejected and disappointed" with the outcome. "My worst fears have come true and all hope of justice and redress from the highest court of the land has been shattered. I will consult my lawyer and decide on the next steps. Today, I am at the verge of losing faith in the idea of justice," she said in a statement.

The Chief Justice appeared on Wednesday before the panel, which continued the inquiry even after the complainant opted out.

The woman withdrew from the inquiry on Tuesday, saying she felt she was "not likely to get justice from this committee". In a letter, she said she found the "atmosphere of the committee very frightening" and that she felt "very nervous" as she was not allowed to bring her lawyer or discuss the proceedings with her.

Soon after the allegation surfaced last month in a news report, Chief Justice Gogoi, at a special hearing of the top court, denied the woman's claims and said he was being targeted as he was to hear several important cases.

"There has to be bigger force behind this, they want to deactivate office of Chief Justice," the Chief Justice said, alleging that the independence of the judiciary was "under threat" and it was being made a "scapegoat".