A low-intensity blast had taken place when a crude IED went off near the Israel Embassy in central Delhi on January 29. No casualties were caused. 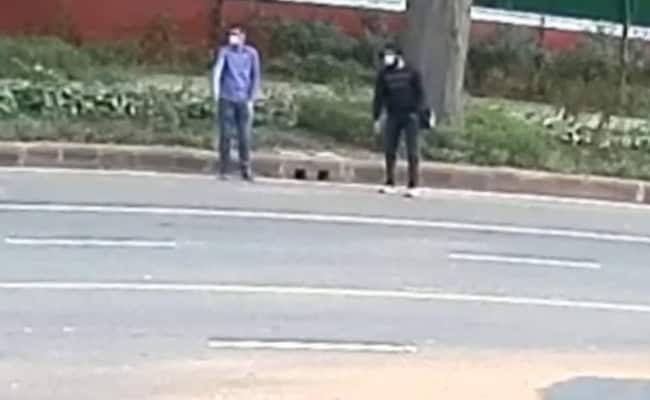 NIA has announced a reward of Rs 10 lakh for information leading to arrest of each suspect.

The National Investigation Agency on Tuesday released CCTV footage showing two men suspected to be involved in a blast near the Israel Embassy in Delhi in January. The agency has announced a reward of Rs 10 lakh to anyone who can provide information leading to the arrest of each suspect.

The agency is seeking help to identify and arrest the two individuals seen to be roaming near the spot on the day of the attack, it said in an official statement.

A low-intensity blast had taken place when a crude IED (improvised explosive device) went off near the Israel embassy on APJ Abdul Kalam Road in central Delhi on January 29. There were no casualties and no damage to property was reported, except the shattering of the window panes of three vehicles parked nearby.

The minor explosion had coincided with the 29th anniversary of India and Israel's diplomatic ties.

Immediately after the explosion, the police had checked CCTV cameras in the vicinity to confirm the sequence of events, officials said. No eyewitness who saw anyone placing the IED near the pavement could be found.

Later, the central government termed the blast a terrorist act and handed over the investigation to the NIA due to the implications on its ties with a friendly nation.

Following the blast, then Israel Prime Minister Benjamin Netanyahu had expressed "full confidence" that India would investigate the blast, and "ensure the safety of Israelis and Jews who are there".

Foreign Minister S Jaishankar had tweeted to say that he spoke to his then Israeli counterpart, Gabi Ashkenazi, and assured him of "the fullest protection for the Embassy and diplomats".