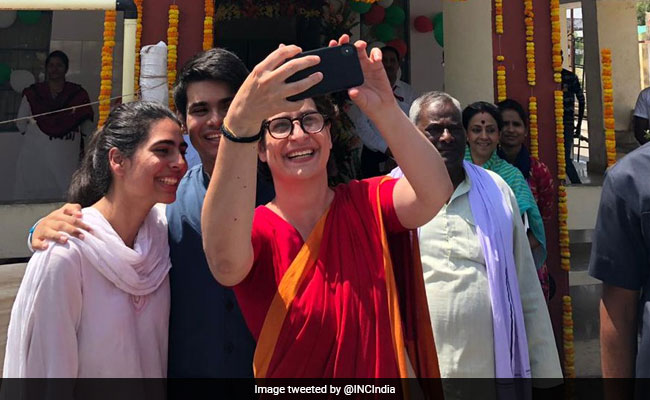 As Rahul Gandhi filed his nomination for the Lok Sabha elections accompanied by his mother, sister and brother-in-law, one moment that stood out in the public display of familial affection was Priyanka Gandhi Vadra's selfie with her children. In signs of the Gandhi family's changing rules of public engagement, Miraya Vadra, 16, and Raihan Vadra, 18, usually kept away from camera glares, were seen in photographs with their mother posted by the Congress party on Twitter.

In January, Priyanka Gandhi Vadra became the latest member of the Nehru-Gandhi dynasty to enter politics to help her brother Rahul Gandhi in general elections that begin tomorrow, pitching the party and regional groups against Prime Minister Narendra Modi and the BJP.

This one is a lot better than the selfie I was trying to take! https://t.co/LCAOAsUcla

Today, she was among the family entourage that flanked Congress president Rahul Gandhi as he rode on the rooftop of a truck, moving on a narrow road in his constituency Amethi in Uttar Pradesh to file his nomination papers.

The truck moved in slo-mo, wading through a large crowd on the road. People sprayed flower petals on the ensemble cast from their balconies, many training their mobile phone cameras.

The Gandhi siblings are a familiar sight in Amethi during election season. In fact, many say people of this constituency have had less sightings of their three-time MP Rahul Gandhi, compared to Priyanka Gandhi Vadra, who has been in charge of the campaign for her brother in Amethi for 15 years.

In this national election, Priyanka Gandhi is a Congress General Secretary, and so belongs to many more constituencies where the party is banking on her charm and charisma to draw in votes.