Assam Assembly Election: "Today I got the good fortune of seeing mother Kamakhya. I prayed for the welfare of all the countrymen to Kamakhya," Priyanka Gandhi tweeted. 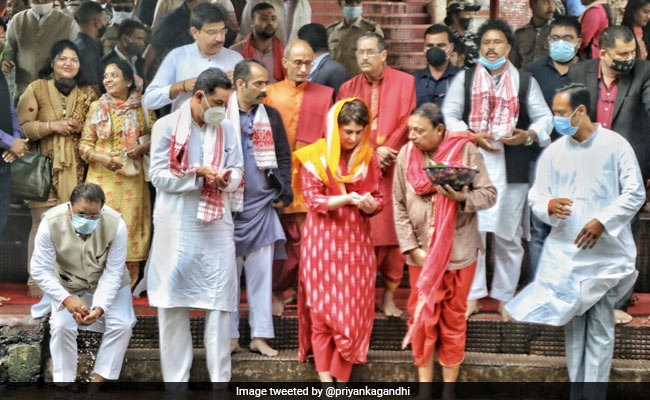 "Today I got the good fortune of seeing mother Kamakhya. I prayed for the welfare of all the countrymen to Kamakhya," she tweeted.

The Kamakhya Temple is a Sakta temple dedicated to the mother goddess Kamakhya. It is one of the oldest of the 51 Shakti Pithas situated on the Nilachal Hill in the western part of Guwahati city in Assam, India.

Priyanka Gandhi Vadra had also visited Sant Ravidas temple on Saturday on his birth anniversary and tweeted about Sant Ravidas's messages of equality to create an ideal society service and goodwill.

However, on Friday, the Election Commission of India announced that Assam will go to Assembly elections in three phases beginning March 27. The counting of votes will take place on May 2.

Addressing a press conference, Chief Election Commissioner Sunil Arora said: "In Assam, elections shall be held in three phases. The first phase of notification is March 2 and 47 seats in 12 districts will go to the polls. The last date of nomination March 9 and the date of poll is March 27. In the second phase, 39 constituencies in 13 districts will go to the polls on April 1. Forty Assembly constituencies in 12 districts to go on polls on April 6. Votes will be counted on May 2."