India's Diversity Is Its Strength: PM Modi To Indian Diaspora In Bahrain

"It took quite a long time for an Indian Prime Minister to visit Bahrain," PM Modi said that he was fortunate enough to be the first Indian prime minister to visit the Gulf Kingdom. 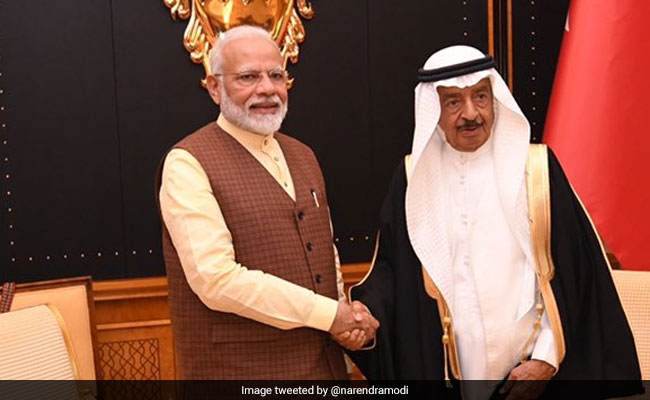 Indian expats will soon be able to transact in Bahrain with RuPay card: PM Modi

Prime Minister Narendra Modi on Saturday said that the diversity and colours of India are its strength, which astonish and attract the world as he offered the Indian diaspora here to avail the new opportunities being generated by his government.

Addressing the Indian community at the packed National Stadium, PM Modi said his visit to Bahrain was as the head of the government, as the Prime Minister of the country, but its main purpose was to meet the Indian diaspora and communicate with them and thousands of friends in Bahrain.

"The diversity and colours of India are our strength, they astonish and attract the world," PM Modi told the Indian expats, who switched on their mobile flash light to welcome the prime minister upon his arrival.

"It took quite a long time for an Indian Prime Minister to visit Bahrain," PM Modi said, adding that he was fortunate enough to be the first Indian prime minister to visit the tiny Gulf Kingdom.

PM Modi, who is on the third leg of his three-nation tour to France, the UAE and Bahrain, is the first Indian prime minister to visit Bahrain.

The prime minister said under his government, India was moving forward with the active participation of crores of Indians both inside and outside the country.

He said his government is sitting on steering only and the accelerator is pressed by the people of the country.

"Our goals are high. We have to double the size of our economy to make USD 5 trillion in coming years" he said.

"Do you feel a change in India? PM Modi asked the crowd which responded with "yes."

He also announced that the Indian expats will soon be able to transact in Bahrain with RuPay card.

"Today, we have signed an MoU, our aim is to provide you the facility to send money to your home in India through RuPay Card," he said.

Noting that ''Chandrayaan-2'' would land on the surface of moon on September 7, PM Modi said the entire world was today discussing India's space missions.

"The world is astonished that how are we able to gain these results in such small budget, using only our skills," he said.

PM Modi hailed the contribution of the Indian community in Bahrain''s growth story and said: "there is immense goodwill here for your honesty, loyalty, workability and your contribution to the socio-economic life of Indians. You have made a place for yourself here with your hard work. We have to strengthen this Goodwill".

"Whenever I hear the praise of the Indian people, the Indian business people here, the people who are settled here, my heart is filled with happiness," PM Modi said, adding the Bahrain prime minister praised the contribution of the Indian community during their meeting earlier today.

"Our relation with Bahrain has been of trade and business, but more than that it has been of humanity, values and culture," he said and asked Indians to invite their Bahraini friends to visit and explore India.

He also said that India and Bahrain will expand cooperation in new field including space.

PM Modi said he will visit the historic Shrinathji's temple tomorrow and pray for the prosperity and peace of all.

Around 350,000 Indian nationals, mostly from Kerala, live in Bahrain. The Indian community comprise a third of Bahrain's total population of 1.2 million.