A resolution passed by NDA members in parliament claimed that PM Modi has fulfilled Mahatma Gandhi's dreams by bringing the Citizenship Amendment Act. 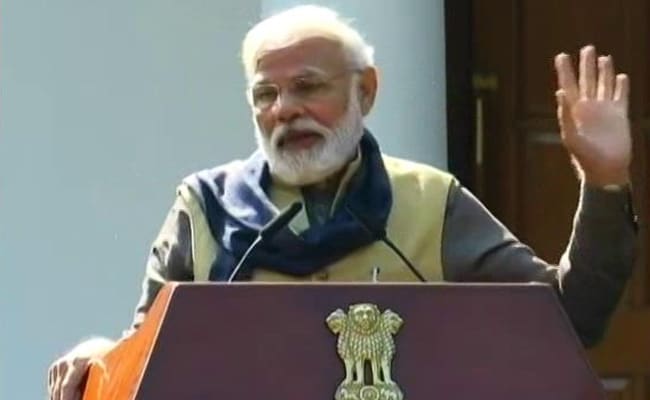 Prime Minister Narendra Modi today asked leaders of the National Democratic Alliance (NDA) to aggressively defend the Citizenship Amendment Act in Parliament, saying that there is no reason to feel defensive about it.

PM Modi made the appeal at a meeting held to strategise for the budget session today. He also asked NDA lawmakers to aggressively counter anybody who claims that the law is discriminatory in nature, and establish on every occasion that the government does not differentiate between citizens.

"Some people are trying to mislead the nation on the Citizenship Amendment Act. Muslims are a part of our nation, and they have equal rights and duties as others," the Prime Minister said.

NDA parliamentarians later passed a resolution backing PM Modi not only on the controversial law but also initiatives such as the the Bodo peace accord, the Kartarpur Corridor and the scrapping of Jammu and Kashmir's special status. The resolution claimed that the Prime Minister had "fulfilled the dreams of Mahatma Gandhi" by bringing the Citizenship Amendment Act.

Protests against the controversial law continue unabated across the country despite repeated assurances by the centre that it is not intended to target any community. The government has also come under pressure from international voices -- including the United States, European Union and United Nations -- to scrap the Act, which they claim is "discriminatory". Earlier this month, the country slipped 10 places to the 51st position in the Democracy Index over concerns related to the scrapping of Jammu and Kashmir's special status and the amended citizenship bill.

The government, however, is showing no signs of backing down on the Citizenship Amendment Act. "Let me say this here and now that the law will not be withdrawn no matter who protests... We are not scared of opposition. We were born in it," Union Home Minister Amit Shah said at a public rally in Lucknow last week.

The government maintains that those protesting the Citizenship Amendment Act have been "tricked" by opposition parties into thinking that it's intended to victimise the country's resident Muslims. It has also condemned the use of violence and vandalism to express opposition to the law.

Earlier today, President Ram Nath Kovind sparked off an uproar in Parliament by terming the Citizenship Amendment Act as a fulfilment of Mahatma Gandhi's wishes. "The Father of our Nation -- Mahatma Gandhiji -- had said after partition that Hindus, Sikhs, Buddhists, Jains, and other religious minorities in Pakistan and Bangladesh (East Pakistan) should be granted citizenship of India if they come seeking refuge. I am happy that both houses of Parliament passed the Citizenship Amendment Act to ensure Bapu's wishes come true," he said, evoking applause from the treasury benches but cries of "shame" from the opposition.

The country has been witnessing protests since December last year, when the government enacted the Citizenship Amendment Act that makes it easier for non-Muslims migrants from Pakistan, Afghanistan and Bangladesh to become Indian citizens. Critics say that the law is against the secular principles of the country and is likely to pose a threat to the country's Muslim community when implemented in coordination with the National Register of Citizens.