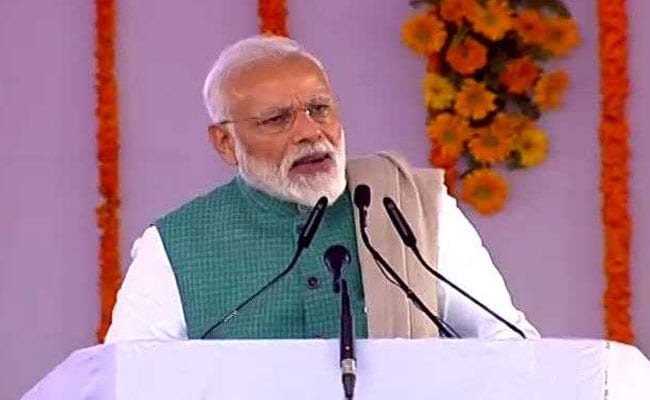 Prime Minister Narendra Modi arrived in Uttar Pradesh's Amethi today, the parliamentary constituency of Congress president Rahul Gandhi. PM Modi addressed a rally in Amethi. On stage along side PM Modi were Chief Minister Yogi Adityanath and Union Ministers Smriti Irani and Nirmala Sitharaman. This is PM Modi's first visit to Amethi after coming to power in 2014, in the constituency which has remained loyal to the Gandhi family for long. PM Modi previously visited Amethi on May 5, 2014 and the BJP, which had fielded party leader Smriti Irani against Mr Gandhi in 2014 general election, had managed three lakh votes. Ms Irani has been nurturing the constituency since and is expected to contest again in the coming poll, expected to be held in April-May. Earlier today, PM Modi was in Bihar's Patna sharing a stage with Chief Minister Nitish Kumar at the NDA's Sankalp rally.

Here are the highlights of PM Modi's Amethi visit:

Mar 03, 2019 17:24 (IST)
12 lakh farmers will be benefitted through the Kisan Nidhi scheme: PM Modi
They never tried to establish and empower farmers. The farm loan waivers has only benefited middlemen. But our Kisan Nidhi scheme has in true sense benefited farmers.
12 lakh farmers will be benefitted through the new scheme: PM Modi
Mar 03, 2019 17:22 (IST)
Gas connection, Free electricity have been made possible because of our government. We are trying to help the poor to develop and let families come above the poverty line: PM Modi
Mar 03, 2019 17:19 (IST)
Farmers' lands were taken away in Gauriganj. The steel factory in the city is now all ready to provide job opportunities: PM Modi
Mar 03, 2019 17:18 (IST)
(Hinting the Opposition) They sat on Rafale for years. We are trying to bring in the jets and some people are trying to object to the purchase. Supreme Court too is supporting the government's decision on the Rafale deal: PM Modi
Mar 03, 2019 17:15 (IST)
2,30,000 bullet proof jackets for the forces have been bought only by our government: PM Modi
Between 2009 to 2014 -- bullet proof jackets were not purchased for our jawans. But our government took the initiative. 2,30,000 bullet proof jackets for the forces have been bought only by our government: PM Modi
Mar 03, 2019 17:14 (IST)
Lack of modern rifles, lack of jobs have been major hindrances for Forces and also the youth: PM
Mar 03, 2019 17:12 (IST)
PM Modi (in an apparent reference to Rahul gandhi): " Some people keep  giving "made in..", speeches, But Modi walks the talk. We have made "Made in Amethi" a reality. This factory should have come into being 8-9 year back. But the full potential of the initiative was never realised."
1500 people were promised job in Amethi facoty but only 200 were given job.
Mar 03, 2019 17:10 (IST)
Forces and their needs were neglected. The factory in Amethi will strengthen the country's defence and safety: PM
Mar 03, 2019 17:09 (IST)
The rifles made here will be exported to other countries also. It will create job opportunities and also strengthen the economy and country: PM
Mar 03, 2019 17:06 (IST)
Kalahsnikov rifles will be manufactured in Amethi: PM Modi
Amethi will be known through the new scheme now. Ak-203-- Kalahsnikov rifles will be manufactured in Amethi, it will Russia and India's joint venture.
Joint venture has been possible only because of the efforts of President Putin, Defence minister Nirmala Sitharaman: PM Modi
Mar 03, 2019 17:05 (IST)
Smriti Irani helped develop Amethi: PM Modi
Sab ka saath and sab ka vikas is our mantra. Those who voted for us and who did not, everyone belongs to us. After 5 years, I humbly say that Smriti Irani was a new face to the people in Amethi, but your love has made us popular and helped Smriti Irani to develop Amethi on a large scale: PM Modi
Mar 03, 2019 17:02 (IST)
I remember when I came here with Atalji in 1998. It was raining that day also and since have been visiting the city. After becoming PM I have the opportunity to meet you all again: PM Modi
Mar 03, 2019 17:01 (IST)
PM Modi addresses people in Amethi
PM Modi: UP Chief minister Yogi Adityanath, Defence minister Nirmala Sitharaman and Smriti Irani and other ministers along with the people of UP: Jai Ram Ji Ki
Mar 03, 2019 16:58 (IST)
Defence minister Nirmala Sitharaman read out Vladimir Putin's message on occasion of inauguration of ordnance factory for Kalahsnikov rifles
"On Ak203 initiative -- During one of my visits, me and y friend Modi ji signed up for the initiative. This will help strengthen India's economy, defence and India-Russia ties. My best wishes."
Mar 03, 2019 16:51 (IST)
We our thankful to PM Modi for giving UP a defence corridor. 7.5 lakh rifles will be made available to our soldiers. The impossible is now possible only because of PM Modi: Yogi Adityanath.
Uttar Pradesh Chief Minister Yogi Adityanath on Sunday also announced an ex-gratia of Rs 25 lakh and a government job each to the next of the kin of two Central Reserve Police Force soldiers from the state, who lost their lives in the Jammu and Kashmir's encounter
Mar 03, 2019 16:47 (IST)
Smriti Irani has implemented many schemes in Amethi: Yogi Adityanath
The one family who dominated all these areas earlier were never concerned about the poor. Smriti Irani ji has done much more legwork in Amethi than Rahul Gandhi: Yogi Adityanath
Mar 03, 2019 16:46 (IST)
Amethi was a VVVIP area. Cooking gas never reached the poor households, but how have things changed only because of Modi ji. Over 78,000 households in Rae Bareli have also got free electricity because of PM Modi.
Mar 03, 2019 16:43 (IST)
Modi hai to Mumkin hai: Yogi Adityanath
UP is now progressing in all spheres. We have Jan Dhan account for all the poor, famers, and all citizens for everyone. PM's different schemes are benefitting the entire state. It's a matter of pride for everyone. We had terror attacks earlier. Keeping in mind the 14th and 15th Feb attacks, PM Modi declared to give it back to the terror groups and maintain the pride of the soldiers.
UP's 1crore families got Ujawala Connection, And Amethi has free of cost gas connection.
Mar 03, 2019 16:16 (IST)
PM Modi reaches Amethi in Uttar Pradesh 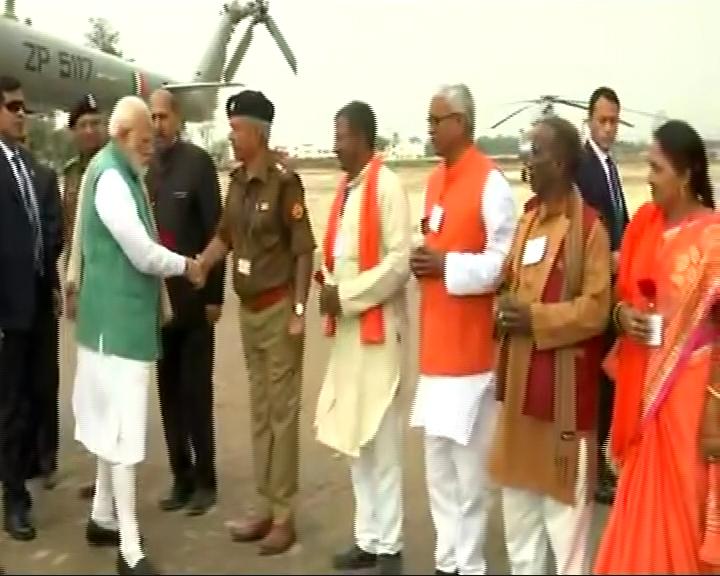 Mar 03, 2019 14:19 (IST)
PM Modi Concludes His Speech
Prime Minister Narendra Modi ended his speech with another round of "Bharat Mata ki Jai" chants. Hence, the Sankalp rally in Patna concluded. PM Modi will be addressing another rally in Uttar Pradesh's Amethi. He is scheduled to speak at 3:30 pm on Sunday.
Mar 03, 2019 14:17 (IST)
India's Diplomatic Win
Referring to Saudi Crown Prince's visit to India, PM Modi, "On my request, the Crown Prince increased India's quota for Haj pilgrims." He also said, crown prince decided to release 850 Indians lodged in Saudi jails. I thank Crown Prince and it is a proof of strengthening ties with other countries.  He further cited the OIC's invitation to Sushma Swaraj as an honourary guest to appreciate India's diplomatic win.
Mar 03, 2019 13:46 (IST)
PM Modi Speaks On Balakot Airstrike
While the entire country is rejoicing over the IAF's successful airstrikes on terror camp in Pakistan's Balakot, few of our own people have raised suspicions on the surgical strike, said PM Modi alluding it to the Congress. PM Modi said Now they have even started asking for proof of the #AirStrike. Why are Congress and its allies demoralising our forces? Why are they giving statements which are benefiting our enemies?
Mar 03, 2019 13:36 (IST)
Railway Development In Bihar
Nitish Kumar is a witness to Atal Bihari Vajpayee's railway development in Bihar: PM Modi
Mar 03, 2019 13:32 (IST)
Role Of Middlemen Eliminated: PM Modi
People of Bihar are very much aware of what all happened in the name of fodder. Only we (NDA government) have dared to end the culture of corruption and middlemen which had been a normal practice in the country for decades, said  PM Modi said at the Sankalp Rally
Mar 03, 2019 13:27 (IST)
Prime Minister Narendra Modi Attacks Opposition
PM Narendra Modi says, these days a competition is underway to abuse the 'Chowkidaar', but you be assured, this 'Chowkidaar' of yours is as alert as ever.
Mar 03, 2019 13:21 (IST)
Transformation Of Bihar Is NDA's Vision
The vision of the NDA is to eliminate illiteracy in Bihar and to guarantee education and health schemes for all. NDA government will work for development in Bihar, says PM Modi
Mar 03, 2019 13:09 (IST)
PM Modi Addresses Rally In Patna
Prime Minister Narendra Modi addresses rally in Patna. PM Modi pays tribute to Pulwama attack martyrs. Crowd chants "Bharat Mata ki Jai" with PM Modi.
Mar 03, 2019 13:05 (IST)
Proper Sanitation In Bihar By 2019
Nitish Kumar promises PM Modi that every village in Bihar will have proper sanitation by October 2, 2019. He lauds PM Modi for bringing electricity to villages across the country. The Bihar government wants to build toilets for all houses in every corner of Bihar with the PM Modi government's assistance by October 2, 2019. "By this year's Gandhi Jayanti, Bihar will be open defecation free," Mr Kumar said.
Mar 03, 2019 13:00 (IST)
All Praises For PM Modi At Sankalp Rally
Chief Minister of Bihar, Nitish Kumar, has begun addressing Sankalp Rally. Thanking the Indian Air Force for their "commendable" action against terrorists, Nitish Kumar lauded Prime Minister Narendra Modi for giving the security forces a free hand in dealing with terror outfits."I congratulate Prime Minister Narendra Modi for forcing Pakistan to release Wing Commander Abhinandan Varthaman with a short span," said Nitish Kumar while praising the Modi goevrnment's diplomacy.
Mar 03, 2019 12:17 (IST)
PM Modi In Patna For 'Sankalp Rally'
Prime Minister Narendra Modi has reached Gandhi Maidan for the 'Sankalp Rally' in Patna. He is scheduled to address the public at 12:45 pm. PM Modi was received by Bihar chief minister Nitish Kumar.
Mar 03, 2019 11:41 (IST)
Watch PM Modi Rally Live
PM Modi tweeted saying, This afternoon, I would be joining the NDA rally at Patna's iconic Gandhi Maidan. Watch my address at the rally live on the NaMo App.
Mar 03, 2019 11:21 (IST)
Thousand Gathered In Patna For PM's Rally
Thousands of people have gathered in Patna to witness Prime Minister Narendra Modi and Bihar Chief Minister Nitish Kumar share the stage at the NDA's Sankalp rally.
Mar 03, 2019 10:28 (IST)
Main Aim Is To Secure India
The NDA rally which will be addressed by Prime Minister Narendra Modi is aimed at taking a resolve to make a new and secure India.
Bihar Sankalp rallyBihar election campaignPatna