The presidential polls will take place on July 18 and the results will be declared on July 21. 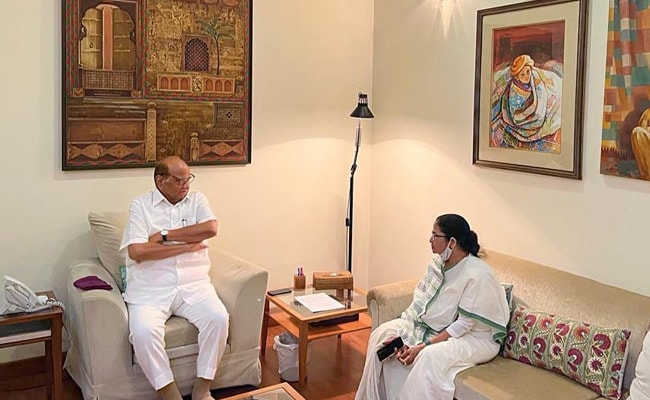 The presidential polls will take place on July 18 and the results will be declared on July 21.

Here are the LIVE updates on the Opposition Meet:

JD(S) is represented by HD Kumaraswamy while DMK's TR Baalu is also among those attending the meet.

AIMIM chief Asaduddin Owaisi on Wednesday said he was not invited to the meeting called by Trinamool Congress (TMC) supremo and West Bengal Chief Minister Mamata Banerjee with the Opposition leaders to discuss the Presidential polls.

Speaking to ANI over the phone, Mr Owaisi said, "I was not invited. Even if I were invited, I would not have participated. The reason is Congress. The TMC party which speaks ill about us, even if they had invited us, we would not have gone just because they invited the Congress."
Jun 15, 2022 13:19 (IST)
TRS, BJD, AAP and SAD Likely To Skip Meeting
The TRS, BJD, AAP and SAD are likely to skip Wednesday's opposition meeting called by TMC supremo and West Bengal Chief Minister Mamata Banerjee to forge a consensus on fielding a joint candidate against the NDA in the presidential election.
Chief Minister Banerjee last week invited leaders of 19 political parties, including seven chief ministers, for a meeting in the national capital to produce a "confluence of opposition voices" for the election on July 18.

Leaders from the Shiromani Akali Dal, Aam Aadmi Party and the Telangana Rashtra Samithi won't attend the meeting, sources in the three parties said. A BJD leader added on condition of anonymity that the party had not yet received any instruction from their chief Naveen Patnaik. Senior leader Pinaki Misra is also not in the country.

Some parties, including the BSP and the AIMIM, were not invited.
Jun 15, 2022 11:51 (IST)
Chief Minister KCR's Party Skips Opposition Meet
The Telangana Rashtra Samithi (TRS) of Telangana Chief Minister K Chandrashekhar Rao, who had bonded with Mamata Banerjee over their common goal of defeating the BJP, opted out of the meeting this morning, raising strong objections to the Congress being invited. Arvind Kejriwal's Aam Aadmi Party (AAP) is likely to be another significant absentee, sources say.
"There is no question of sharing any platform with the Congress," said the TRS in a pungent note.
The party said the Congress had been invited despite its objections and lashed out at its leader Rahul Gandhi. "Rahul Gandhi, in a recent public meeting in Telangana had targeted the TRS government without any word of criticism against the BJP," the note said, accusing the Congress of "ganging up with the BJP" in Telangana, especially in recent by-polls.