President's Address On Eve Of Republic Day 2021: Where To Watch, Time

Republic Day 2021: President Ram Nath Kovind's address will be telecast through all the channels of Doordarshan in Hindi followed by the English version, and later in regional languages by the regional channels. 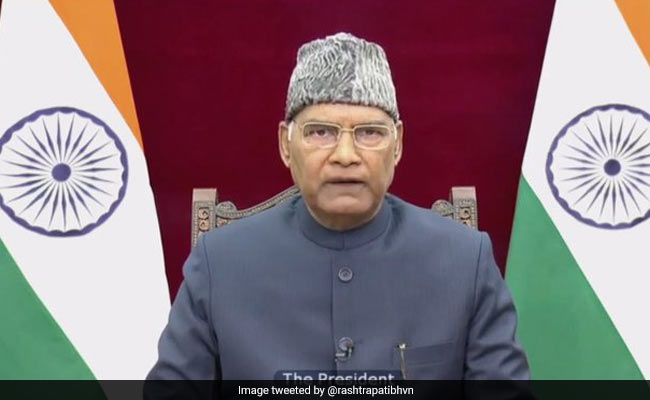 President Ram Nath Kovind will adresss the nation on the eve of the 72nd Republic Day. (File)

President Ram Nath Kovind will address the nation on Monday on the eve of the 72nd Republic Day, which will be broadcast at 7:00 PM on All India Radio and Doordarshan TV channels across India.

It will be telecast through all the channels of Doordarshan in Hindi followed by the English version, and later in regional languages by the respective regional channels. The All India Radio will broadcast regional language versions of the President's address from 9:30 PM onwards.

Ahead of Republic Day on Tuesday, January 26, the Delhi Police has stepped up security and intensified patrolling and verification drives across the national capital to thwart any untoward incidents.

As India celebrates its 72nd Republic Day, the annual parade at Delhi's iconic Rajpath is set to be different in comparison to previous years amid the novel coronavirus pandemic. The number of attendees at Rajpath have also been reduced -- 25,000 will be seated along the ceremonial boulevard instead of 1.15 lakh.

During last year's address to the nation on the 71st Republic Day, President Kovind had stressed on upholding constitutional ideals, saying it is the responsibility of the people of the country to adhere to the tenets of democracy enshrined in the Constitution.

"Our Constitution gave us rights as citizens of a free democratic nation, but also placed on us the responsibility to always adhere to the central tenets of our democracy - justice, liberty, equality and fraternity," he had said in his address.

This morning, Prime Minister Narendra Modi interacted with artists, who will be performing in the Republic Day Parade and lauded the country's socio-cultural heritage, while urging citizens to do whatever they can for the betterment of the country.

While addressing the participants of the parade, which included dancers, NCC cadets and several others, PM Modi said: "When you march along Rajpath with passion and zeal, every countryman is filled with enthusiasm. Your glimpses of the country's rich art, culture, tradition and heritage, every Indian raises their head with pride."

This year's Republic Day celebrations will also run parallel to a tractor rally being organised by farmers to protest against the centre's new farm laws. The protesting farmers have been allowed to enter Delhi but can't disturb the Republic Day parade.