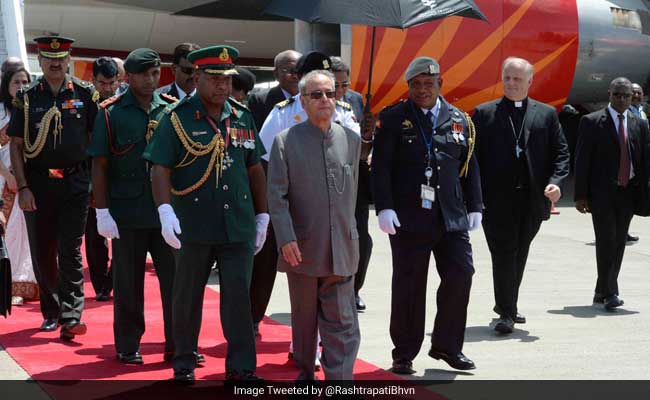 President Pranab Mukherjee during ceremonial reception on his arrival at Papua New Guinea.

Port Moresby, Papua New Guinea: With a focus on developing strong relations with Pacific Island nations, President Pranab Mukherjee today arrived in the capital of Papua New Guinea, the first ever visit by an Indian head of state since India established diplomatic ties with the country in 1975.

President Mukherjee arrived in Port Moresby this morning on the first leg of his two-nation visit and was given a warm welcome. He was received by Deputy Prime Minister of Papua New Guinea Leo Dion.

The President inspected a guard of honour as a 21-gun salute was accorded to him.

The visit of the President is seen as a diplomatic move to counter China's growing influence in the Pacific Island nations.

Before his departure from India, his Press Secretary Venu Rajamony had said the visit was a natural extension of India's 'Look East' policy.

India is looking to enter the health market of the island nation. Ahead of his visit in Port Moresby, the government had approved the signing of an agreement between the two countries, seeking cooperation in the field of healthcare and medical sciences.

The pact will encourage cooperation between the Health Ministries of both the nations through joint initiatives in the sector.

The visit is likely to give push to Indian pharmaceutical companies to set up businesses in the Pacific nation after the local government withdrew a ban in January.

With a population of 7.38 million, diseases like HIV and AIDS are listed as quite rampant in this Pacific nation.

The life expectancy in the country is also less because of high cost of medical care.

President Mukherjee, on April 30, will travel to New Zealand as part of the second leg of his tour.

India and New Zealand will explore prospects for cooperation in agriculture, dairy, food processing, education and skill development as well as high technology during the visit.

The last high-level visit from India to New Zealand was by then Prime Minister Rajiv Gandhi in 1986.