The President expressed happiness the projects being inaugurated or whose foundation stones were being laid pertained to key sectors like health, medical education, irrigation, etc. 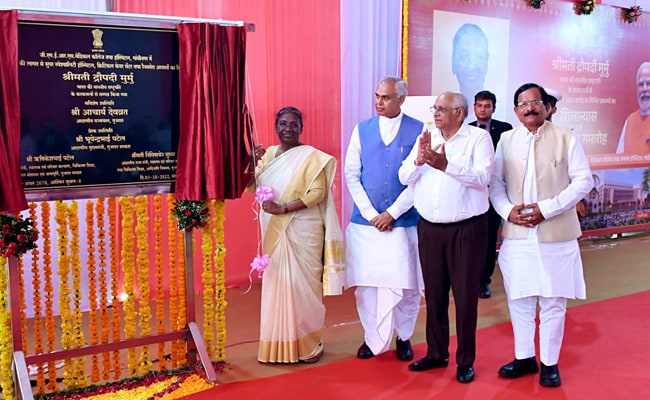 President Droupadi Murmu on Monday inaugurated as well as laid the foundation stones for projects worth Rs 1,330 crore in Gujarat as she hailed the entrepreneurial spirit of its people.

Praising the enterprise and innovation displayed by the people of the state, President Murmu, visiting Gujarat for the first time after assuming the office of President in July, said they have made a special identity for the country in the world.

"Progressive entrepreneurs of Gujarat have made a special identity of Gujarat and India all over the world. Gujarat is one of the leading states in the country in terms of development. The people of Gujarat have a culture of enterprise and innovation," she said at an event here.

The President expressed happiness the projects being inaugurated or whose foundation stones were being laid pertained to key sectors like health, medical education, irrigation, road infrastructure, shipping and waterways, all of which would lead to the state's further development.

"These projects will create new opportunities for employment and help farmers. Small and big entrepreneurs will get more business opportunities," she said at the event held in the auditorium of GMERS medical college and general hospital, which was also attended by Governor Acharya Devvrat and Chief Minister Bhupendra Patel.

The 540-bed ultra-modern hospital will offer huge convenience to the people of Narmada district, where 85 per cent of the population is from the tribal community, in availing medical facilities, she said.

"It is my belief the GMERS hospital and medical college will make an effective contribution to public welfare," she said.

Hailing Gujarat for impressive achievements in the field of health, the President said it was the first state to issue health cards for pregnant women and had also administered more than 12 crore doses of COVID-19 vaccines so far.

"Gujarat is ranked first in achieving Sustainable Development for Good Health and Wellbeing of NITI Aayog. Along with industrial progress, the state has also presented examples in fields of natural farming and environmental conservation," she said.

"Gujarat has nearly five per cent of the country's population, but farmers of the state contribute nearly 20 per cent of national agriculture production. Successful experiments for farm development carried out in Gujarat are being adopted across the country," she said.

The President said a 63,000-kilometre canal network laid out under the Sardar Sarovar Project has brought positive changes in the lives of several lakh people, adding it is important to ensure water security for socio-economic development.

People had to face problems in the past due to water scarcity in north Gujarat, Saurashtra and Kutch regions because of their geographical condition, but that situation has now changed completely, the President stated.

She hailed the state for achieving 100 per cent of its target for access to improved sources of drinking water, while, as per the Composite Water Management Index of NITI Aayog, Gujarat has remained in first position in the country in water management for three consecutive years.

President Murmu said the completion of projects under the Ministry of Ports, Shipping and Waterways at Deendayal Port will increase cargo capacity and boost the development of the region.