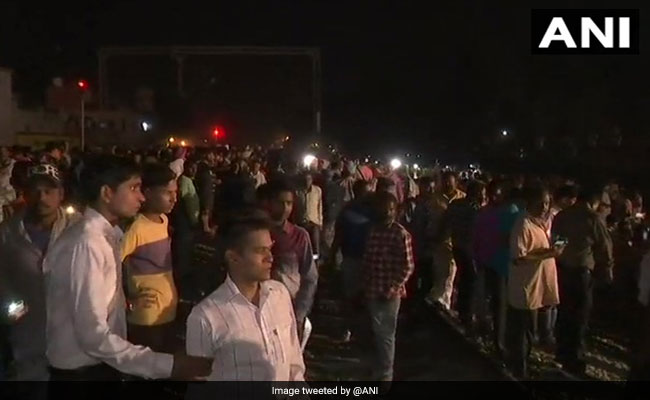 Prime Minister Narendra Modi, President Ram Nath Kovind, Congress President Rahul Gandhi and several other national leaders have expressed their anguish at today's accident in Amritsar, where a train ran over people who were watching the Ravan effigy being burnt.

Expressing his grief, Prime Minister Narendra Modi posted on Twitter, "Extremely saddened by the train accident in Amritsar. The tragedy is heart-wrenching. My deepest condolences to the families of those who lost their loved ones and I pray that the injured recover quickly. I have asked officials to provide immediate assistance that is required".

"The train accident in Punjab in which over 50 people have died is shocking. I urge the state government and Congress workers to provide immediate relief at the accident site. My condolences to the families of those who have died. I pray that the injured make a speedy recovery" Mr Gandhi tweeted.

"I am pained beyond words to learn about the tragic train accident in Amritsar. I have spoken to the local BJP unit and asked our karyakartas to join the rescue operation. My deepest condolences with those who have lost their loved ones. I pray for early recovery of those injured," he tweeted.

"Very very sad to learn about the unfortunate rail incident in Amritsar during Dussehra festivities. I have no words to describe my shock and agony. My heart goes out to the family members of the victims. Pray that the injured persons recover very quickly." Mamata Banerjee tweeted.

"Extremely sad news coming about a major train accident near Amritsar I appeal to all our volunteers in the area to help authorities in the relief work and provide whatever help we can in this moment of crisis," Mr Kejriwal wrote on Twitter.

Terming it a "mindless and avoidable tragedy" Mr Abdullah tweeted, "Watching this video you'd be hard pressed to imagine the scale of the tragedy considering the way people are nonchalantly filming away on their phones even after the train has run over people!"

Union railways minister Piyush Goyal cut short his visit to the United States and is rushing back. He said that the rail officials are conducting immediate rescue efforts.

"Shocked and deeply saddened by the tragic train incident that occurred in #Amritsar. My heartfelt condolences to the families of the victims. I pray for the injured to recover quickly. Railways is conducting immediate relief and rescue operations," Mr Goyal tweeted.

Union minister of state for railways Manoj Sinha has reportedly rushed to the spot.

The opposition parties in Punjab have blamed the the local administration for the mishap.

"Extremely sad to hear the unfortunate death of innocent devotees watching Dussehra at Joda Gate in Amritsar by a speeding train. Local organisers and police must answer how the celebrations were allowed to be held near the railway track," Shiromani Akali Dal president Sukhbir Singh Badal tweeted.

Replying to a tweet by Captain Amarinder Singh, Mr Khaira wrote, "We appreciate your efforts to help victims of today's accident but don't you think prevention is better than cure? What preventive steps did your administration take to save these lives due to wrong Dushera location?"

In another tweet he alleged that that the accident was the result of an "administrative failure" by both the Punjab government and the centre.