Posters, Banned In Parliament, Were Weapons Of War In Bengal Assembly

The Central agencies should call Suvendu Adhikari for investigation, but even they appear to have been influenced by his "Don't touch me, I am a male," comment and so no action is being taken against him, the Trinamool said 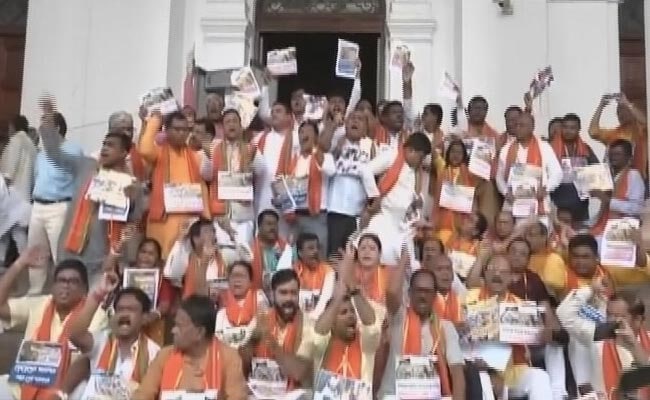 The BJP targeted Trinamool on corruption, the ruling party focused on the BJP's Suvendu Adhikari.

The BJP-Trinamool Congress tussle over the violence during Tuesday's protests has hit the Bengal Assembly, where both sides came armed with bundles of posters today. While the BJP targeted Trinamool on corruption, the ruling party focused on the BJP's Suvendu Adhikari, who is also the Leader of the Opposition in the state assembly. The day ended with a BJP walkout from the assembly, after which the poster battle continued outside.

While carrying posters in parliament became a major issue in the Monsoon session, with Lok Sabha Speaker Om Birla suspending a group of Opposition MPs, Bengal BJP MLAs shrugged it off. Asked about the discrepancy, BJP MLA Agnimitra Paul said, "We asked for a discussion, but they did not allow it. We did not have a choice".

The BJP alleged that Chief Minister Mamata Banerjee and her nephew and party national general secretary Abhishek Banerjee are "patronising corruption". Mr Adhikari accused several district-level leaders of Trinamool of amassing properties not proportionate to their known sources of income.

"I have proof and I will share copies with you. The Trinamool chief and the CM said on September 8 that 99.99 per cent of their party is honest. We have shown that four district leaders including an MLA, have more than 100 illegal properties worth Rs 150-Rs 200 crore and they enjoy the patronage of the bhatija (nephew)," Mr Adhikari said.

The Trinamool responded with posters targeting Mr Adhikari over his touch-me-not comment during Tuesday's protests.

When Mr Adhikari said he would hand over documents supporting his claims to the Enforcement Directorate, the Trinamool had an answer ready.

The Central agencies should call Mr Adhikari for investigation, but even they appear to have been influenced by his "Don't touch me, I am a male," comment and so, no action is being taken against him, the party shot back.

On Tuesday, Mr Adhikari was caught on camera repeatedly telling a woman police officer, who tried to stop him during the protest, "Don't touch me, I am a male". The Trinamool had a field day, and memes and jokes flooded social media.

"This is a habit of the Trinamool Congress. I have defeated Mamata Banerjee in the election. I won. Mamataji lost. Maybe they are angry because of that," was Mr Adhikari's rejoinder.

The Trinamool contends that Mr Adhikari, named in several corruption cases, got absolved after he joined the BJP. Mr Adhikari claims the administration wanted to frame him in a false case.

"The BJP has only one agenda -- to disturb the proceedings. They thought they could only put up posters and disturb us. But we are also absolutely prepared with posters. Today, they were disturbed because they got the right answer," cabinet minister Shashi Panja, who was also carrying a poster, told NDTV.