The BJP is likely to retain both Maharashtra - where it is contesting the polls in an alliance with the Shiv Sena - and Haryana, according to a poll of exit polls.

The ruling BJP will retain power comfortably in Maharashtra and Haryana, exit polls predicted on Monday for the first election to be held since Prime Minister Narendra Modi's landslide victory in May. The BJP is set for a walkover in both Maharashtra - where it is contesting the polls in an alliance with the Shiv Sena - and Haryana, according to NDTV's poll of exit polls.

For Maharashtra, the poll of exit polls, or an aggregate of various exit polls, gives the BJP-Shiv Sena alliance 211 of 288 seats and the Congress-Nationalist Congress Party (NCP) 64 seats. A party needs 145 seats for a majority.

In Haryana, the BJP is likely to win 66 of 90 seats, predicts the polls of polls, and the Congress may be limited to 14. The majority mark is 46.

The ruling party may see its continuing winning streak as a huge endorsement of big decisions like ending special status to Jammu and Kashmir under Article 370, which was the central theme in PM Modi's rallies in both states.

Two more election wins will also bolster the party at a time the opposition has tried to redirect focus on the economic slump, farmer suicides, the agricultural distress and a jobs crisis.

Haryana has the third highest unemployment in the country. 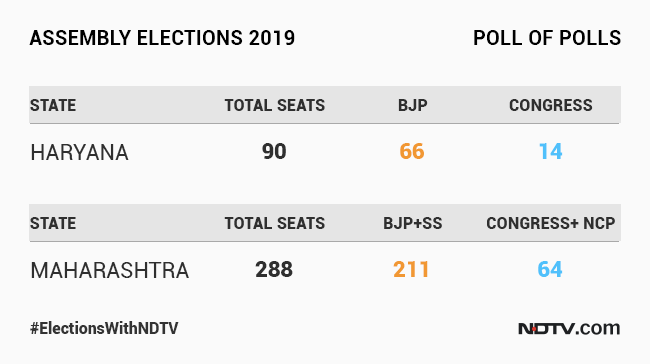 In Maharashtra, where the BJP's narrative swirled around central issues, opposition leaders like Sharad Pawar tried to take on the ruling party on its performance on issues related to the state. The state has struggled with farm distress and farmer suicides.

If exit polls hit the bullseye, Maharashtra Chief Minister Devendra Fadnavis and his Haryana counterpart Manohar Lal Khattar will make a comeback regardless of their mixed report card over the past five years.

Neither faced much of an opposition, which ran a listless campaign in both states. A defeat is not unexpected but will further deflate an already dispirited bunch of parties, especially the Congress.

The Congress is yet to recover from its crash in the national elections; Rahul Gandhi's resignation spurred confusion, infighting and multiple exits.

Apart from Rahul Gandhi, hardly any top Congress leader campaign in either of the two states.

Congress president Sonia Gandhi addressed none; her lone rally in Haryana was cancelled and Rahul Gandhi was stand-in.

The results of Monday's voting will be announced on Thursday.