Heera Ben, 98, who lives in Raisin village near Gandhinagar in Gujarat, was seen watching the ground-breaking ceremony in Ayodhya with folded hands. 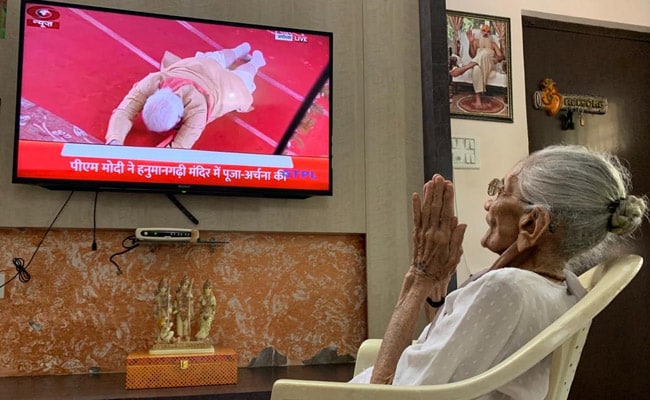 In the past, similar photographs have captured Heera Ben's support for her son's undertakings.

As Prime Minister Narendra Modi laid a 40-kg silver brick for a Ram temple at Uttar Pradesh's Ayodhya on Wednesday, his mother Heera Ben was seen watching the lavish ceremony on the other side of the country.

The 98-year-old, who lives in Raisin village near Gandhinagar in Gujarat with her younger son Pankaj Modi, was seen watching the ground-breaking ceremony on television with folded hands.

An idol of Lord Ram, Sita, Laxman and Hanuman were under was seen under the TV set in the photos released by the BJP.

In the past, similar photographs have captured Heera Ben's support for her son's undertakings.

In March, she was seen clanging utensils to honour essential service workers during the COVID-19 Janata Curfew following the Prime Minister's call.

A few days later, government sources said she had donated Rs 25,000 from her savings to the new PM CARES fund set up to tackle the coronavirus crisis and other national emergencies.

She was also seen standing in a bank queue in 2016 after PM Modi announced demonetisation, the move to scrap large currency notes.

Laying the foundation stone for the Ram temple at the site where the 16th century Babri mosque was violently demolished by right-wing activists in 1992, PM Modi on Wednesday said, "A long wait ends today."

"A grand temple will now be built for Lord Ram who had been living under a tent for many years," said the Prime Minister, addressing the gathering to chants of "Jai Shri Ram".

Construction of the temple was made possible by a verdict last year from the Supreme Court awarding the disputed site to the Hindus. The court ordered a five-acre plot at a different site in Ayodhya for a mosque.