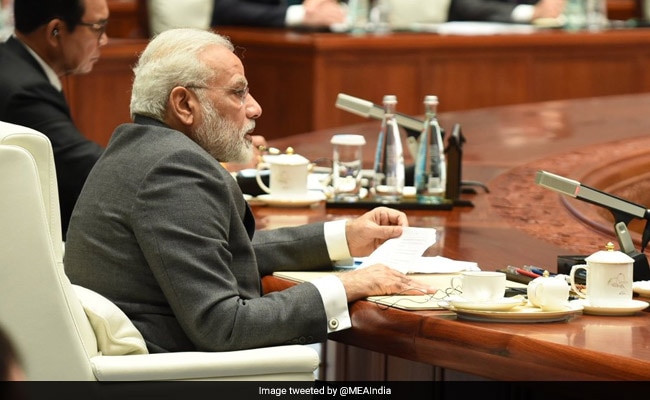 Xiamen, China: Prime Minister Narendra Modi today pitched for an organised and coordinated action on counter terrorism, as he suggested 10 commitments through which BRICS leadership for global transformation can be achieved.

Speaking at the "BRICS Emerging Markets and Developing Countries Dialogue", organised by China on sidelines of BRICS Summit as an outreach exercise, Prime Minister Modi also assured India's partnership with fellow developing countries, while pursuing its own aspirations for growth.

"Whatever we do, will impact the world substantially. So, it is our solemn duty to make a better world -- brick by brick, or, through BRICS...," PM Modi said.

"I had spoken about the BRICS driving the global transformation in the next ten years for it to be a Golden Decade. I suggest that this can be brought about with our proactive approach, policies and action," he said.

Describing these countries as "close and valued" partners of India, the prime minister said he was pleased to exchange perspectives with them on the shared priority of achieving comprehensive sustainable development and thanked President Xi Jinping for bringing the countries together.

He said that BRICS, which represents almost half of the humanity, can achieve global transformation with a proactive approach, policies and action based on ten "Noble Commitments".

The commitments include creating a safer world by organised and coordinated action on at least three issues -- counter terrorism, cyber security and disaster management.

The commitments suggested by the prime minister also included creating a greener world by taking concerted action on countering climate change through initiatives such as the International Solar Alliance.

Talking about India's national review of sustainable development goals as per the UN's '2030 Agenda', the prime minister said the bedrock of the country's development agenda lies in the notion of 'Sabka Saath, Sabka Vikaas' (with all, for everybody's development).

"Our programmes are geared to accomplish these priority goals in a time-bound manner. To cite just one example, our three-pronged approach of providing a bank account to the unbanked, providing a biometric identity to all, and using innovative mobile governance solutions, has enabled direct benefit transfers to almost 360 million people for the first time," he said.

Maintaining that India would like to see such domestic efforts buttressed by strong international partnerships, Prime Minister Modi said the country stands ready to play its part. "India has a long tradition of partnerships with fellow developing countries, while pursuing our own aspirations for growth. At every step, we have shared our experience and resources across a range of sectors: from strengthening democratic institutions to deploying high-tech solutions for public good," the prime minister said.

He also noted that India had launched the South Asia Satellite for the benefit of willing regional partners in meeting their developmental goals in education, healthcare, communication and disaster management.

Promoted
Listen to the latest songs, only on JioSaavn.com
He also said that for over half a century, India's flagship initiative -- Indian Technical and Economic Cooperation (ITEC) -- has offered training and skill development to 161 partner countries from Asia, Africa, Eastern Europe, Latin America, Caribbean and Pacific Island states.

"And, in all of this, our 'no strings attached' model of cooperation is driven purely by the requirements and priorities of our partner countries," PM Modi added.