"While India is being praised across the world, we also remember the skepticism spread by the opposition on vaccination," Nirmala Sitharaman said. 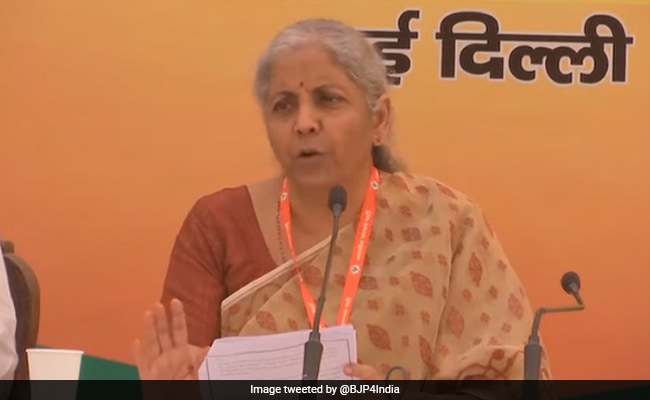 Women-led development is our motto, the Finance Minister said.

Listing out the accomplishments of the government during her speech at the BJP national executive meeting, Finance Minister Nirmala Sitharaman took a shot at the opposition accusing them of tarnishing India's image. "While India is being praised across the world for the vaccination program, we also remember the skepticism spread by the opposition over the vaccination from the very beginning," she said.

The minister said that India's "great methodical way" in administering over 100 crore vaccine doses is being praised across the world. She pointed out that Rs 36,000 crore was allocated in the budget for vaccination and improving overall healthcare infrastructure.

The entry of women in defense and Army, and the establishment of Sainik schools came as a part of the resolution, the minister said. Women-led development is our motto, she said.

Several party leaders in the meeting have stressed on vaccination numbers and the distribution of free ration to the poor under the Pradhan Mantri Garib Kalyan Yojana. "Taking care of human lives, we gave food to 80 crore people for 8 months," Ms Sitharaman said. She also pointed out that "one nation, one ration card" was issued. This scheme allows migrant workers to get ration at the place of their work in other states as well where their ration cards are not registered.

The minister also referred to the reading down of Article 370, claiming that Jammu and Kashmir is now moving from "terrorism to development" in spite of "all the troubles". She pointed out that between 2004 and 2014, 2,081 people died in Jammu and Kashmir in terrorism-related incidents while from 2014 to September 2021, only 239 civilians lost their lives. "This proves that peace has now been established in Jammu and Kashmir," she said.

Referring to District Development Council (DDC) and Block Development Council (BDC) elections in the union territory after the abrogation of Article 370, she said that people are willing to come out to participate in the democratic processes. "A statistic I'd like to highlight is the Industry Promotion Scheme worth Rs 28,400 crore, which was launched in Jan 2021, for J&K. 54 projects worth Rs 56,201 crore have also been launched," she said.

The minister condemned post-poll violence in Bengal and said that the party will stand by them during all legal processes and "will support every BJP worker in the party in Bengal".