PM Narendra Modi key message at the opening session of World Economic Forum will be that India is open for business and its economy can contribute to global growth. 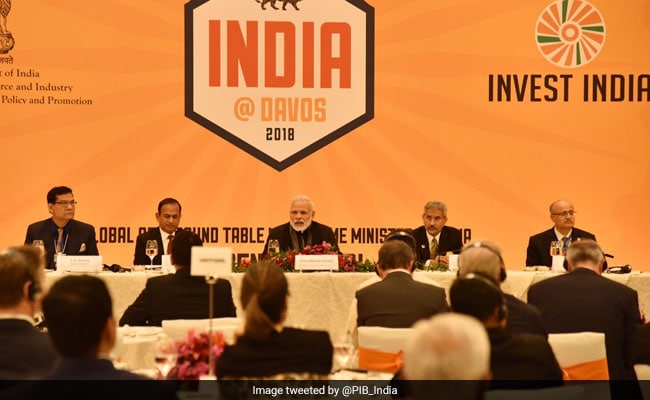 Davos 2018: PM Narendra Modi hosted a roundtable meeting with CEOs from across the world in Davos

Davos: At a round table with global CEOs in Davos, Prime Minister Narendra Modi addressed everyone by their first name, took questions and invited ideas, participants told NDTV on Monday.

"It was a very fantastic event, PM himself was so involved in not just communicating what he had done in India, but was very open to listening to what more can be done...to every point he had a response," Chanda Kochhar told NDTV.

Later in the day, PM Modi became the first Indian prime minister to speak at the World Economic Forum. He debuted at the opening session, where his message was that India is open for business.

Those who attended the round table said many global CEOs spoke about how they were increasing investments in India.

Mr Yergin observed that it was "most interesting" how people were looking at India "very different than four years ago. "What struck me more than anything else is that he said we are moving from the ease of doing business to the ease of living, less fighting with governments, less conflict," he said.

Promoted
Listen to the latest songs, only on JioSaavn.com
The energy pundit also felt it was a "really big deal" that an Indian prime minister is there after a long time.

Vedanta's Anil Agarwal said he found it "amazing" how much he remembered for everybody. "He addressed everybody by personal name...Today, at Davos, everybody is talking about Modi. People are not getting enough of him," Mr Agarwal told NDTV.
Comments
Davos 2018Prime Minister Narendra ModiCEO meet Davos