A day after PM Modi called for a mass movement against single-use plastic from October 2 that marks the 150th birth anniversary of Mahatma Gandhi, Aamir Khan tweeted in his support on Monday. 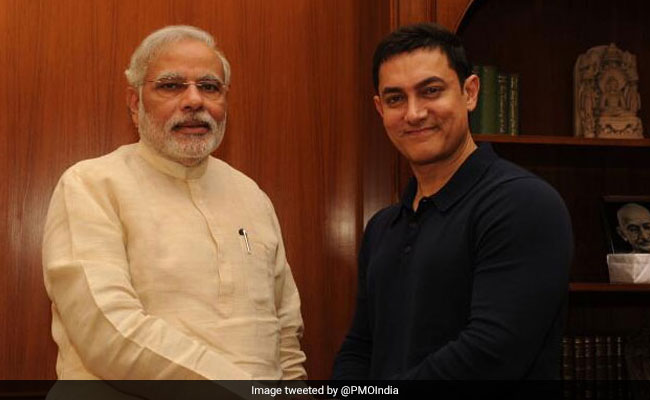 Aamir Khan's encouraging words to curb the use of single-use plastic will inspire others to strengthen the initiative, Prime Minister Narendra Modi said today, thanking the actor.

A day after PM Modi called for a mass movement against single-use plastic from October 2 that marks the 150th birth anniversary of Mahatma Gandhi, Aamir Khan tweeted in his support on Monday.

"The initiative by the Hon'ble PM @narendramodi to curb 'single use plastic' is an effort all of us should strongly support. It's up to each of us to make sure we stop using 'single use plastic'," tweeted the the 54-year-old actor, who often voices concern on environmental issues.

Thank you @aamir_khan for the valuable support to the movement to eliminate usage of single use plastic.

Your encouraging words will inspire others to strengthen the movement as well. https://t.co/AwKi1SzXde

In June, actor Salman Khan had shared impactful video where he can be seen offering water to a monkey, whom he calls his ''Bajrangi Bhaijaan'', in a plastic bottle. The monkey, however, refuses. Mr Khan then offers water in a glass and ''Bajrangi Bhaijaan'' is quick to accept it.

In his monthly radio address "Mann Ki Baat" on Sunday, PM Modi urged people to observe October 2 as a day to make India plastic-free and exhorted municipalities, NGOs and the corporates to come up with ways for safe disposal of accumulated plastic waste before Diwali. PM Modi had spoken of the ending the usage of single-use plastic in his Independence Day speech too.

"This campaign has enthused people ... Many of my merchant brothers and sisters have put up a placard at their establishments, boldly mentioning that customers ought to carry shopping bags with them. This will result in monetary savings as well as one would be able to contribute towards protection of the environment," PM Modi had said.