PM Modi has been meeting with various groups and industrialists over the past few days. Monday's meeting was in line with those discussions in the run-up to the Union Budget due next month. 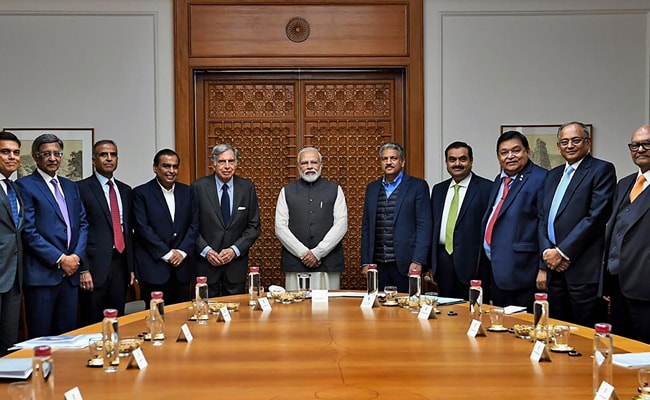 Prime Minister Narendra Modi met with the country's top industrialists, including Mukesh Ambani and Ratan Tata, on Monday to brainstorm on ways to revive the economy and create jobs as the Budget draws near. The meeting was held at the PM's office in the afternoon.

PM Modi has been meeting with various groups and industrialists over the past few days. Monday's meeting was in line with those discussions in the run-up to the Union Budget due next month.

The pace of economic growth dropped to 4.5 per cent, the weakest in six years, in the latest GDP data for the July-September quarter. The slump in manufacturing output and consumption demand has played a big role in the slowdown.

In an attempt to check the slowdown, the government slashed corporate tax to 22 per cent from 30 per cent in September and also lowered the tax rate for new manufacturing companies to 15 per cent to attract new foreign direct investments. The tax rate reductions bring India on par with rates in other Asian countries.

The government has also taken up other initiatives include bank recapitalization, the merger of 10 public sector banks into four, support for the auto sector, plans for infrastructure spending, as well as tax benefits for startups.

The Reserve Bank of India (RBI)'s response was to ease policy rates significantly in the last year, with a series of rate cuts since February 2019.