Maharashtra Farmer "Very Happy" After PM's Shout-Out Over His Innovation

Rajendra Jadhav, a farmer from Satana town in Nashik, has developed a sprinkling machine named "Yashwant", which is currently being used by the local civic body to sprinkle disinfectants to curb the spread of coronavirus. 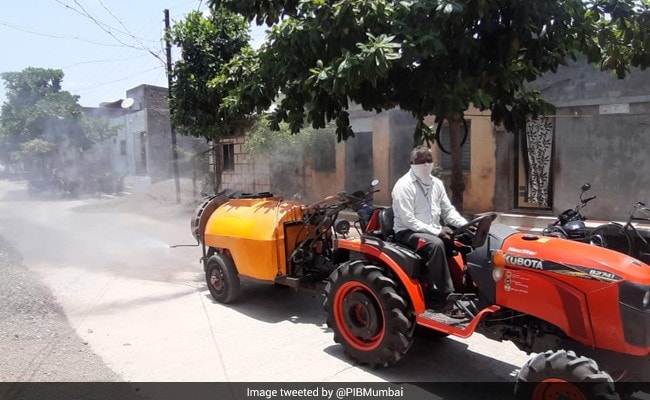 Mr Jadhav said he has applied for a patent (File)

For Rajendra Jadhav, 62, a farmer in Maharashtra's Nashik, it was a pleasant surprise when Prime Minister Narendra Modi mentioned his name and praised his innovation during his "Mann Ki Baat" address on Sunday.

Mr Jadhav, a farmer from Satana in Nashik, has developed a sprinkling machine named "Yashwant" that is being used by the local civic body to disinfect surfaces and curb the spread of coronavirus.

During the radio programme on Sunday, PM Modi mentioned Mr Jadhav's sprinkling machine. The farmer, who has studied only till Class 10, runs a workshop of farm equipment and gets help from his family.

Mr Jadhav said he developed the machine to spray insecticide in his farm. "Coronavirus has created panic everywhere. PM Modi announced lockdown to prevent its spread. I made some changes in the machine and gave it to Satana Nagar Parishad to sprinkle disinfectants during the pandemic," he said.

With the help of the machine, roads, housing societies, doors and compound walls can be cleaned, he said.

"I am very happy that PM Modi has taken note of my work. Irrespective of my age, I will do more such work for the farmers and the nation," said Mr Jadhav, who won the President's medal for one such innovation in 2017.

"The machine has two aluminium blades fixed on each side. These blades rotate, absorb air from opposite directions and spray the disinfectants using force. A 15 horsepower tractor can be used to operate the machine, which can clean even 15-feet-high walls. This machine has 600-litre capacity tank," he added.

Operating the machine needs minimal human intervention, he said. "We developed the machine in 25 days. It is currently being used by Satana Nagar Parishad (municipal council) to sanitise 30 km area in the town."

Mr Jadhav said he has applied for a patent and sent its design to the National Innovation Foundation (NIF).