PM Modi said that the partnership between India and Russia has extended beyond the framework of military and technical cooperation. 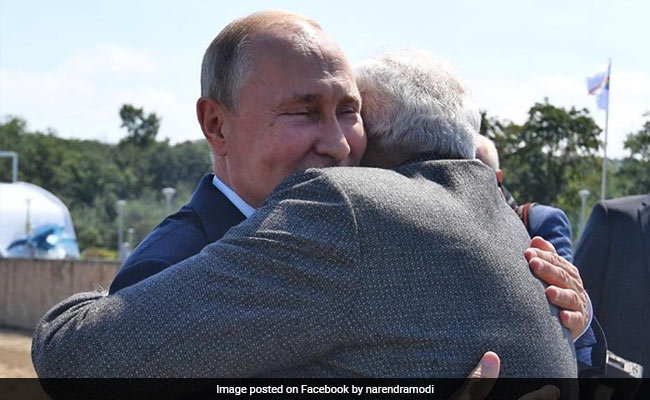 Prime Minister Narendra Modi has said that his visit to Russia will give a "new energy and a new impetus" to relations between the two countries. PM Modi landed in Vladivostok early this morning and will hold talks with Russian President Vladimir Putin and attend the Eastern Economic Forum during his two-day visit. He is the first Indian prime minister to visit the Russian Far East Region.

"Your invitation to me, for Eastern Economic Forum is a matter of great respect. This is a historical occasion to give a new dimension to the support between the two countries. I am waiting to participate in the forum tomorrow," PM Modi said. Earlier today, he visited the Zvezda shipbuilding complex along with President Putin.

Talking about his visit, the Prime Minister, in an interview to Russia's state-run TASS news agency on Tuesday, had said, "It seems to me that nature itself connects us with the far east. For example, every December, Siberian cranes fly to my native state of Gujarat. For them, this is a kind of tourist destination. Siberian cranes fly from there to Gujarat, many Indians go to the Far East. So this is a natural connection."

In a tweet in Russian today, PM Modi shared the link of his interview in which he spoke about Indo-Russian ties.

The Prime Minister said that New Delhi and Moscow need to take advantage of the low production cost in India to produce military equipment at cheaper rates. "Today, provided that technologies are transferred, the production of military equipment can be cheap in India. And we will be able to supply these weapons to third countries at very low prices. India and Russia need to take advantage of this opportunity," PM Modi said.

He said that the partnership between India and Russia has extended beyond the framework of military and technical cooperation, pointing out Moscow's help to train astronauts for India's first manned mission, the ambitious Gaganyaan project.

"Information technologies are developing well in India and we are making success in the space sphere. Now, as we are developing the Gaganyaan project. Russia will help us train our astronauts. This cooperation is not limited to just military and technical and related fields. It goes beyond this framework," the Prime Minister said in the interview.

In another interview, he said he planned to discuss tiger conservation with Mr Putin, a lover of big cats."Our relationship has special chemistry, special ease," PM Modi told the Rossiyskaya Gazeta newspaper. "With each meeting with President Putin, we get closer and our relationship grows," he said.

The Prime Minister said that Indo-Russian partnership has extended beyond the framework of military and technical cooperation, as manifested in the help extended by Moscow to train Indian astronauts for the Gaganyaan project.

Russia and India are part of the BRICS group of major emerging economies - along with  Brazil, China and South Africa.

In Vladivostok, PM Modi will attend the 5th Eastern Economic Forum as the chief guest at the invitation of Mr Putin. He will also hold the 20th India-Russia Annual Summit with the Russian President. "I am confident that this visit will give a new vector, new energy and a new impetus to the relations between our countries," PM Modi said.

(With inputs from ANI and AFP)