"People Who Don't Care About The Nation...": PM Modi's Jibe At Opposition

PM Modi said it is easy to form a government, but the BJP has "chosen the path of building the nation...which takes hard work." 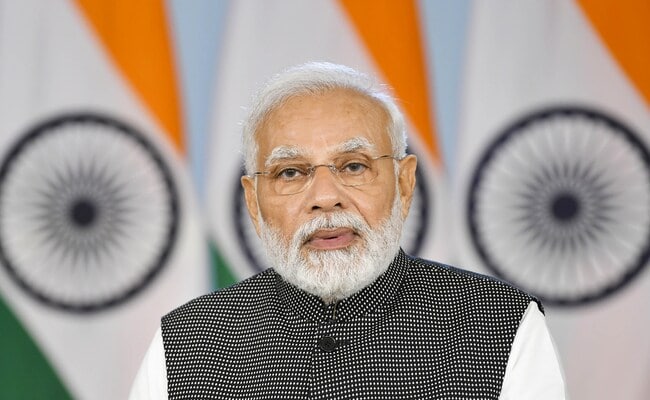 PM Modi made the remarks while addressing the 'Har Ghar Jal' event.

Prime Minister Narendra Modi on Friday, in a veiled attack on the Opposition parties in the country, said that "people who do not care about the country, stay indifferent to the problems faced by the nation". Praising the efforts by the NDA government in the last eight years, he said that it is easy to form a government, but the BJP has "chosen the path of building the nation...which takes hard work."

"It doesn't take that much effort to form a government, but to form a country, hard work is essential," PM Modi said while addressing the 'Har Ghar Jal' event.

"We (the BJP government) have chosen the path of building the nation. Hence, we are continuously working towards addressing and solving the challenges of both - the present and the future," the Prime Minister said.

Taking a dig at the Opposition parties, he continued, "People who do not care about the nation don't show any concern or interest towards these problems. They can make big promises for the provision of water, but will never work towards it with a vision."

The Prime Minister had last month warned against the culture of freebies, which certain political parties indulged in.

The Prime Minister today addressed the Har Ghar Jal Utsav under Jal Jeevan Mission via a video message. The event took place at Panaji Goa. Goa Chief Minister Pramod Sawant and Union Minister Gajendra Singh Shekhawat were among those present on the occasion.

The Prime Minister also greeted Krishna devotees on the auspicious occasion of Janmashtami.

At the outset, PM Modi shared every Indian's pride in three important milestones related to the huge goals that India is working on in Amrit Kaal, that were accomplished today.

He said, "Firstly, today 10 crore rural households of the country have been connected to piped clean water facility. This is a big success of the government's campaign to deliver water to every household. This is a great example of 'Sabka Prayas'".

Secondly, he congratulated Goa for becoming the first Har Ghar Jal certified state where every household is connected to piped water. He also acknowledged Dadra Nagar Haveli and Daman and Diu as the first Union Territories to achieve the feat.

The Prime Minister praised the people, government and local self-government institutions for their efforts. He informed that many states are going to join the list very soon.

The third achievement, the Prime Minister informed, is that one lakh villages in different states of the country have turned ODF plus. After the country was declared Open Defecation Free (ODF) a few years ago, the next resolution was to achieve ODF plus status for villages, which means they should have community toilets, plastic waste management, grey water management and Gobardhan projects.