The former Union Minister, who was brought to the hospital with a head injury, is likely to be discharged in a few days. 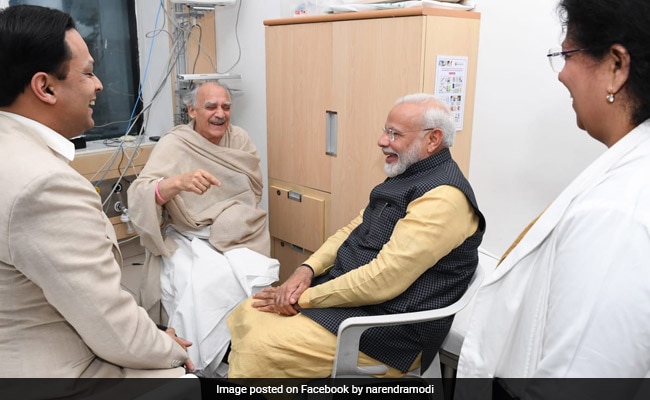 Prime Minister Narendra Modi on Sunday paid a visit to former Union Minister Arun Shourie at a Pune hospital, where he was admitted after suffering a head injury early last week.

"In Pune, I met former Union Minister Arun Shourieji. Enquired about his health and had a wonderful interaction with him. We pray for his long and healthy life," PM Modi posted on Facebook along with a photograph of the two sharing a laugh.

The 78-year-old politician was brought to the Ruby Hall Clinic after he collapsed while on a walk near his Lavasa bungalow on the night of December 1. Hospital officials said that although Mr Shourie had to be admitted to the intensive care unit with internal injuries and swelling of the brain, his condition improved rapidly. He is expected to be discharged from the hospital in a few days.

"PM Modi spent 15 minutes with Shourie. They embraced during their interaction," news agency PTI quoted a doctor as saying. "He later spoke to Shourie's relatives outside his room."

Mr Shourie was the Union Minister for Communications, Information Technology and Disinvestment in the Atal Bihari Vajpayee government from 1999 to 2004. A prolific writer and Ramon Magsaysay Award winner, he also served as an economist with the World Bank through 1967-1978.

Mr Shourie and PM Modi have not always seen eye to eye on matters related to governance. During an event at Jaipur's Pink City Press Club last November, the former Union Minister accused the BJP-led central government of creating "an atmosphere of intolerance" in the country and urged the media to speak out against its policies. A few days later, he claimed that the situation in the country was "graver than what it was like during the Indira Gandhi-imposed Emergency in the 1970s".

In the run-up to the Lok Sabha elections earlier this year, Mr Shourie urged the opposition to "unitedly oust the BJP government" from the centre and claimed that the "Bengal tigress" -- referring to Trinamool Congress chief Mamata Banerjee -- would emerge victorious.

He, along with former cabinet colleague Yashwant Sinha and activist-lawyer Prashant Bhushan, had also filed a petition against the Rafale aircraft deal with French firm Dassault in the Supreme Court.