"BJP Scaled New Heights Due To Ideology, Not Family": PM Modi To Lawmakers

The Prime Minister also exhorted the lawmakers to remain active as ground-workers despite their ascent up the political ladder. 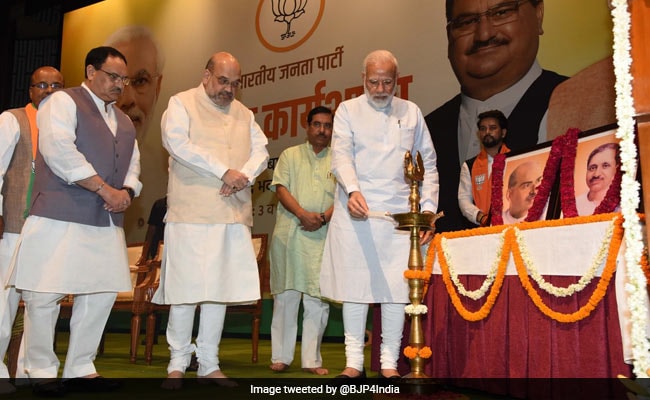 PM Modi at the Sansad Karyashaala at the GMC Balyogi Auditorium in New Delhi on Saturday.

The BJP is an "organic entity" that has achieved political prominence through its ideology, Prime Minister Narendra Modi said at a two-day orientation programme conducted for BJP parliamentarians in the national capital today.

"The BJP is an organic entity and not an assembled entity. It has reached here because of its ideology and thoughts, not because of one family's legacy," sources quoted PM Modi as saying at the event, dubbed as the "Abhyas Varga". The last part of his remark was an apparent jibe at the Congress, which the BJP claims is too dependent on the Gandhi family.

The Prime Minister also exhorted the lawmakers to remain active as ground-workers despite their ascent up the political ladder. "The party worker in you should always remain alive, even if you become a minister or an MP. Irrespective of your age, always remain a student so that the learning process goes on," he said.

PM Modi cited the relationship between a mother and her newly married son to drive home his point. "Just like a mother-law becomes insecure after her son gets married and starts focussing on his wife, your favourite people in the constituency feel neglected once you move on. They think that you won't pick their calls or attend to them now that you have become a neta. A successful leader is one who strikes a balance between both his work and his people," sources quoted him as saying.

The two-day event for BJP parliamentarians, for which attendance was compulsory, began at 10 am. The closed-door sessions focused on conduct, discipline, parliamentary procedures and ideological issues, sources said. While the event began with an inaugural speech by BJP working president JP Nadda, Home Minister Amit Shah is expected to speak on the role of parliamentarians later in the evening.

According to the BJP leadership, the "Abhyas Varga" is an effort to familiarise both first-time and seasoned lawmakers with their rights and responsibilities. "Many MPs (Members of Parliament) are first-timers. There are also those who have joined us from other political parties. It thus becomes important to organise events that will not only familiarise them with the party but also lay down what is expected of them," a senior BJP leader said, adding that more such workshops can be expected in the future to address indiscipline in the ranks.