The trilateral meeting took place at a time when China is engaged in territorial disputes in the South China Sea, and with Japan in the East China Sea. 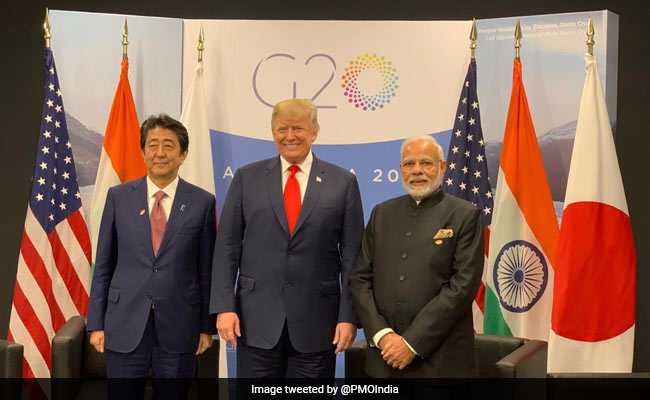 During the meeting, the three leaders shared their views on a free Indo-Pacific. (AFP)

Prime Minister Narendra Modi, US President Donald Trump and Japanese Prime Minister Shinzo Abe on Friday met for their first trilateral meeting on the sidelines of the G-20 summit to discuss major issues of global and multilateral interests.

The meeting assumed importance in the wake of China flexing its muscles in the strategic Indo-Pacific region.

Asserting that India will "continue to work together on shared values," PM Modi said, "The 'JAI' (Japan, America, India) meeting is dedicated to democratic values...'JAI' stands for victory (in Hindi)." The prime minister also said the meeting was a convergence of vision between the three nations.

The leaders emphasised the importance of cooperation among the three countries on all major issue of global and multilateral interests such as connectivity, sustainable development, counterterrorism and maritime and cyber security.

They shared their views on a free, open, conclusive and rule-based order in the Indo-Pacific region, based on respect for international law and peaceful resolution of all differences.

The trilateral meeting took place at a time when China is engaged in hotly contested territorial disputes in the South China Sea, and with Japan in the East China Sea. Both the areas are said to be rich in minerals, oil and other natural resources.

China claims almost all of the South China Sea. Vietnam, the Philippines, Malaysia, Brunei and Taiwan have overlapping claims in the waterway, which includes vital sea lanes through which about $3 trillion in global trade passes each year.

The US has been conducting regular patrols in the South China Sea to assert freedom of navigation in the area where Beijing has built up and militarised many of the islands and reefs it controls in the region.

PM Modi, in his keynote address at the Shangri La Dialogue in Singapore in June expounded India's stand on the strategic Indo-Pacific region.

"India does not see the Indo-Pacific Region as a strategy or as a club of limited members. Nor as a grouping that seeks to dominate. And by no means do we consider it as directed against any country. A geographical definition, as such, cannot be," he had said.