PM Modi said it was our common responsibility to ensure that reasons that threaten Afghanistan's sovereignty and security are not repeated. 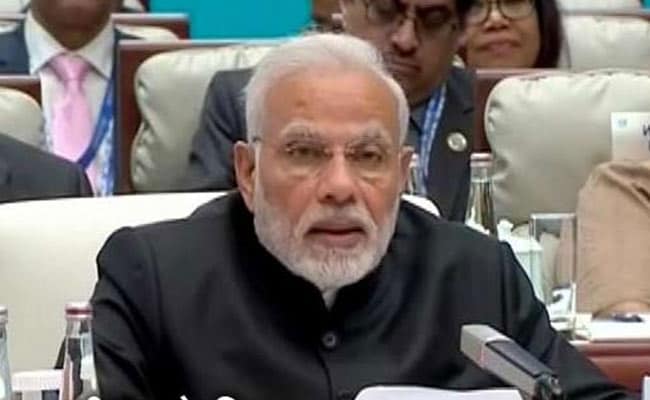 Beijing: Prime Minister Narendra Modi on Sunday appealed for a regional front against terrorism and slammed attempts to "threaten" peace in Afghanistan, which accuses neighbouring Pakistan of causing trouble in its territory.

At the restricted session of the Shanghai Cooperation Summit in the Chinese city of Qingdao, PM Modi said the worsening situation in Afghanistan was "an unfortunate example" of terrorism.

India and Afghanistan accuse Pakistan of plotting terror attacks in their countries.

"All parties in the region should respect the sentiment with which (Afghan) President Ghani has taken courageous steps for peace," PM Modi said.

He said it was "our common responsibility to ensure that reasons that threaten Afghanistan's sovereignty and security are not repeated".

PM Modi also talked about connectivity projects and said India was all for such programmes provided they respect the country's sovereignty and territorial integrity.

New Delhi opposes Beijing's Belt and Road project, whose key artery cuts through the disputed Kashmir held by Pakistan and claimed by India.

"We have again reached a stage where physical and digital connectivity is changing the definition of geography. Therefore, connectivity with our neighbourhood and in the SCO region is our priority," PM Modi said.

"We welcome any new connectivity project, which is inclusive, sustainable and transparent and respects country's sovereignty and regional integrity. India's active participation in the development of international North-South Transport Corridor, Chabahar port, shows our commitment," he added.

He also talked about regional security.

He coined an acronym for the word SECURE: 'E' for economic development, 'C' for connectivity in the region, 'U' for unity, 'R' for respect of sovereignty and integrity and 'E for environment protection.
Comments
PM Modi Afghanistan