The prime minister lauded the role of telemedicine for patients in home isolation and said this service needs to be expanded in rural areas as well. 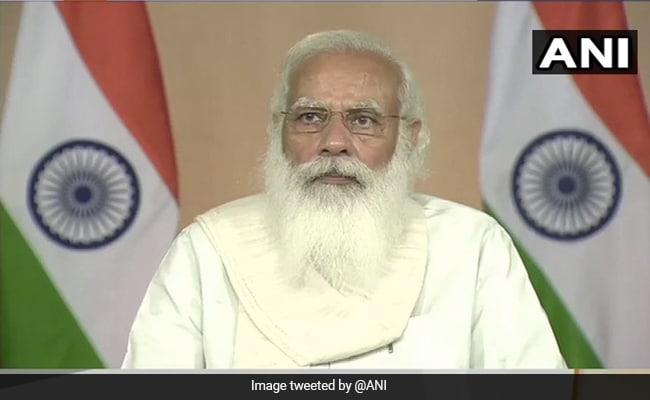 PM Modi also underscored the need for the doctors to include oxygen audit in their daily efforts.

Noting that the strategy of starting the COVID-19 vaccination programme with frontline warriors has paid rich dividends in the second wave, Prime Minister Narendra Modi said on Monday that the vaccines have ensured the safety of most of the doctors as 90 per cent of health professionals have already taken their first dose.

In an interaction with a group of doctors via video-conferencing on Monday, the prime minister said: "The strategy of starting vaccination programme with frontline warriors has paid rich dividends in the second wave. About 90 per cent of the health professionals in the country have already taken the first dose. Vaccines have ensured the safety of most of the doctors."

He said be it testing, supply of medicines or set-up of new infrastructure in record time, all these are being done at a fast pace. Also, several challenges of oxygen production and supply are being overcome.

He thanked the entire medical fraternity and the paramedical staff for the exemplary fight displayed by them against the extraordinary circumstances of the second wave, adding that the entire country is indebted to them.

The prime minister also urged the doctors to include oxygen audit in their daily efforts.

Highlighting that a large number of patients are undergoing treatment in ''home isolation'', he requested the doctors to ensure that the home-based care of every patient is standard operating procedure (SOP)-driven.

He said that telemedicine has played a big role for patients in home isolation, and this service needs to be expanded in rural areas as well.

Praising doctors who formed teams and are providing telemedicine service in villages, Prime Minister Modi appealed to the fraternity across states to form similar teams, train final year MBBS students and MBBS interns, and work towards ensuring that all tehsils and districts of the country have this service.

The prime minister also discussed the challenge of Mucormycosis or black fungus and said that doctors may need to put in extra effort towards taking active steps and spreading awareness about it.

Underscoring the importance of psychological care along with physical care, he said, "Continuously fighting this long battle against the virus must be mentally challenging for the medical fraternity, but the power of faith of citizens stands with them."

The meeting was attended by Member (Health) NITI Aayog, Health Secretary, Pharmaceutical Secretary and other officers from the Prime Minister's Office and ministries and departments of the central government.