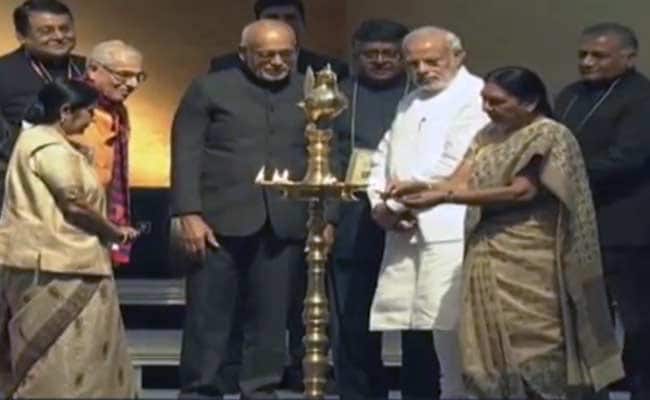 About 4000 NRIs from 58 countries are in the city to attend the annual fest that brings together members of the Indian diaspora to engage and discuss investing in India.

The Foreign Minister of South Africa, Maite Nikoana-Mashabane is the chief guest and President of Guyana Doland Ramotar is being presented the Pravasi Bharatiya Samman, the highest honour conferred on overseas Indians and people of Indian origin.

2015 is the centenary year of the return of Mahatma Gandhi to India from South Africa on January 9, 1915. The  Pravasi Bharatiya Divas has traditionally celebrated Gandhi as the original NRI.

On Friday,  several chief ministers will pitch their states as investment destinations to the NRI delegates. There is speculation that Uttar Pradesh chief minister Akhilesh Yadav might give the event a miss after controversy over the removal of about 60-odd posters showcasing his state at the venue.

Promoted
Listen to the latest songs, only on JioSaavn.com
Uttar Pradesh government officials have shot off an angry letter to the Anandiben Patel government in Gujarat, stating that Pravasi Bharatiya Divas is a central government event and that the host state should not have allowed UP to be "undermined."

The Pravasi Bharatiya Divas is being organised for the first time in Gandhinagar. The Gujarat capital will also host, at the same venue, the Vibrant Gujarat Summit from Sunday. PM Modi will be back in his home town to inaugurate that mega event too.

Both events began in the same year - 2003. While the biennial Vibrant Gujarat is a pet project of Narendra Modi, who was then Gujarat chief minister, the Pravasi Bharatiya Divas was begun by the first BJP prime Minister Atal Bihari Vajpayee.