Rajnath Singh said asserted that the aim of the ministry is that personnel are taken care of the same way they took care of the county. 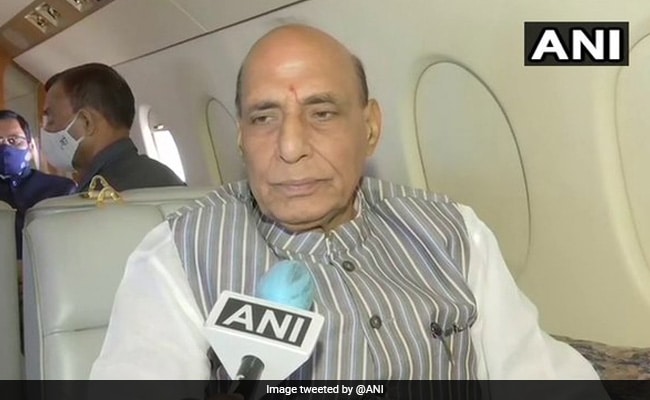 Defence Minister Rajnath Singh addressed army veterans in Leh on the first of his three-day trip.

Prime Minister Narendra Modi has fulfilled the commitment made to armed forces veterans by providing the 'one rank one pension' scheme, said Defence Minister Rajnath Singh on Sunday.

Addressing army veterans in Leh on the first of his three-day trip, the Defence Minister said: "Our Prime Minister Narendra Modi fulfilled the commitment given to the Armed Forces veterans by providing for one rank one pension."

Speaking on the problem of resettlement after service, he said the problem still persists. "Along with this, job fairs are also organised by the Directorate General Resettlement from time to time, in which a large number of veterans are given employment. We are trying to speed up this work."

He asserted that the aim of the ministry is that personnel are taken care of the same way they took care of the county.

"Our aim is that all of you should be taken care of in the same way you all have taken care of the security of the country. Despite this, if you people have any problem somewhere, then a helpline has also been arranged for that," he said.

The minister also lauded the soldiers saying, "The dedication of our soldiers and veterans towards the country is exemplary. I express my gratitude from the bottom of my heart to all."

Mr Singh is currently in Leh for a three-day visit to the region. He is scheduled to inaugurate infrastructural projects constructed by the Border Roads Organisation (BRO), and will also interact with troops deployed in the region.