The phone call is significant a day after Mr Badal, 93, wrote to PM Modi urging him to ''show magnanimity'' towards protesting farmers. 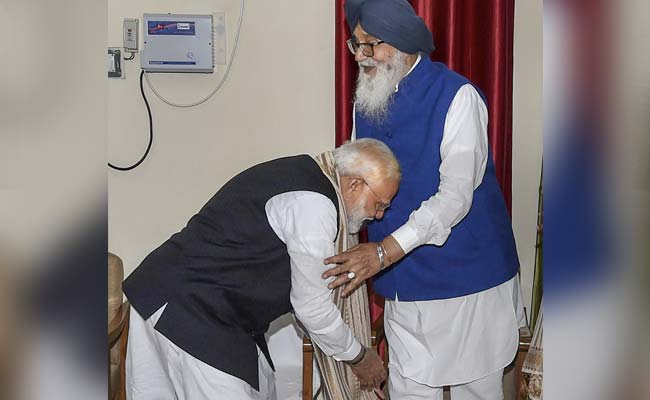 Prime Minister Narendra Modi dialled former Punjab Chief Minister Parkash Singh Badal this morning to wish him on his birthday amid bitterness between the former allies over the farmer protests, sources said.

The phone call is significant a day after Mr Badal, 93, wrote to PM Modi urging him to ''show magnanimity'' towards protesting farmers and scrap the three new laws that they oppose. The four-page letter also had pointed references to former Prime Minister Atal Bihari Vajpayee - one of the BJP's tallest leaders - and the Emergency imposed by Indira Gandhi.

"The three Acts in question that have pushed the country into a deep turmoil must be withdrawn without making farmers and their families endure any more suffering in this biting cold," Mr Badal said in his letter.

The five-time Punjab Chief Minister said "the roots of the ongoing crisis lie in the abdication of our commitment to the federal approach" and called for an immediate course correction.

He said the government would have done well to enact legislation "affecting the destiny of millions and millions of farmers" only after taking their representatives and farmer-friendly political parties like the Shiromani Akali Dal in confidence.

"I have battled against the dictatorship during the Emergency days. My experience tells me that respect for peaceful democratic values offers us the best solutions to even the most complex and intractable problems," he wrote.

"The country has seen how statesmen like Atal Behari Vajpayee understood and respected the beauty of the diversity of our nation and turned it into an asset."

It was "hard to believe" that a government with such a "massive mandate" allowed such failure in decision making, he said.

Mr Badal's Shiromani Akali Dal, one of the BJP's oldest allies, broke up with the party recently over the farmer protests.

"Consultation, conciliation and consensus are the foundation of any democracy. Consultative processes alone lead to consensus and consensus alone is the recipe for avoiding confrontations like the one we see now between the government and the farmers," Mr Badal's letter said.