Prime Minister Narendra Modi, on a day-long visit to Jammu and Kashmir, said there was no alternative to peace and stability. 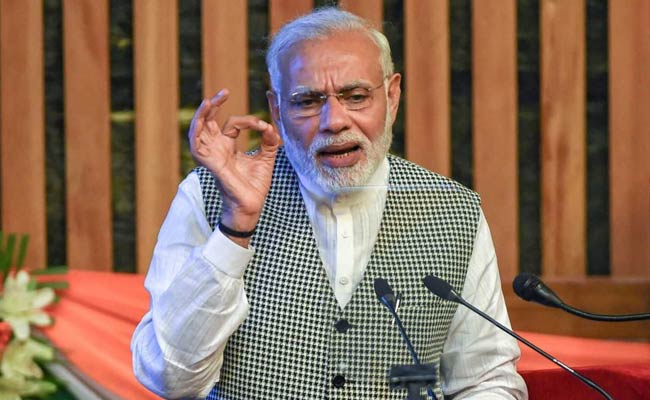 Srinagar: Prime Minister Narendra Modi today appealed to the "misguided youths" of Jammu and Kashmir to shun violence and join the mainstream. He was speaking at the Sher-e-Kashmir International Convention Centre in Srinagar, where he laid the foundation stone for the Srinagar ring road project. He is on a day-long visit to Jammu and Kashmir in which he was expected to inaugurate several infrastructure projects.

PM Modi said there was no alternative to peace and stability. The PM said, "My appeal to these misguided youths is to return to the national mainstream, which is their own family, and participate in the development of Jammu and Kashmir."

This was the first time the Prime Minister was speaking after the government announced a halt to anti-terror operations in Jammu and Kashmir during the holy month of Ramzan.

Amid chants of "Modi, Modi", the PM inaugurated the project and laid the foundation stone for the Srinagar ring road.

He also dedicated the 330-MW Krishenganga power project to the nation. He said Jammu and Kashmir had the potential to provide electricity to other parts of the country.

"Jammu and Kashmir has many rivers that have potential for electricity generation. This state has the potential not only to meet its own requirements, but can also produce power for the rest of the country," he said.

"Keeping this in mind, we have been working on several projects for the past four years," he added.

He said that the work on the 1,000-MW Pakal Dul power project in Kishtwar district will start soon.

"We are also making efforts to provide uninterrupted electricity supply to every household in Jammu and Kashmir, and advanced technologies such as smart meters are being used, and street lights are being modernised.

Promoted
Listen to the latest songs, only on JioSaavn.com
"Rs 4,000 crore is being spent on improving the power distribution network in J&K so that every village and town of the state is lit up," he said.

(With inputs from PTI)
Comments
Narendra ModiJammu and Kashmir