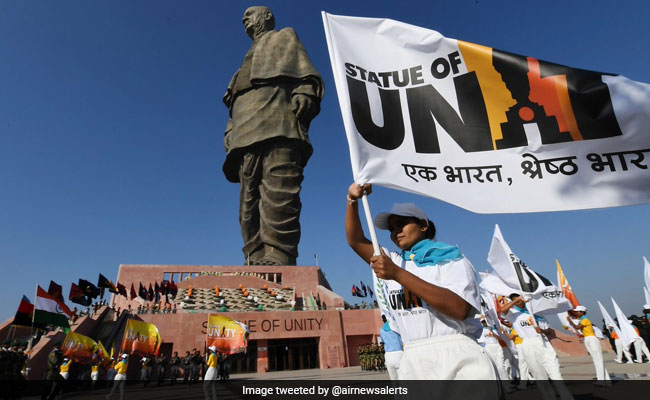 PM Modi said Sardar Patel's contribution towards unification of India inspired him for the award.

Prime Minister Narendra Modi has announced the institution of a new national honour for National Unity on the pattern of Padma Awards, an official statement said on Sunday.

The annual award would be given to any Indian who has contributed to national unity in any manner, it said, adding that the prime minister drew inspiration from Sardar Patel's contribution towards unification of the country.

PM Modi also released a commemorative postal stamp on the National Police Memorial and a special issue of Indian Police Journal on police martyrdom, published by the Bureau of Police Research and Development (BPR&D), it said.

PM Modi also suggested that a national level parade may be organised by police forces of about three to four states near the Statue of Unity, every year on Sardar Patel's birthday on October 31.

This day is also observed as National Unity Day.

PM Modi also launched the website of the Cyber Coordination Centre, which will be a one-stop shop on all cyber related issues, be it cyber crime or cyber security.

The Centre would also act as a bridge between law enforcement agencies on the one hand, and academia and private cyber security professionals on the other, the statement said.

The three-day conference also focused on improving cyber security in the country and on preparing the police forces to prevent and investigate cyber crimes and financial frauds.

According to the statement, it was Sardar Patel, who, as the home minister of the country, had inaugurated the first conference of Inspector Generals of Police in Delhi in 1948.

For this reason, Sardar Patel's message of national unity was the underlying theme of this year's conference, it said.

At the conclusion of the conference, PM Modi praised the contribution of the police forces in maintaining internal security and directed the heads of police forces to take steps towards creating a more responsive and sensitive police force, the statement said.

PM Modi further emphasised that coordination of Central Armed Police Forces (CAPF) and Central agencies with the state police forces and amongst neighbouring states was absolutely essential for successfully dealing with complex issues of crime prevention and management of law and order in the country, it said.

PM Modi advised the police officers to creatively use information technology to reach out to all sections of society through websites and apps to provide various police related services and safety advisories.

He highlighted the misuse of social media by anti-national forces for creating mass unrest and for radicalising vulnerable youth in this context.

A large number of issues concerning internal security, criminal justice system, terrorism, left-wing extremism and bridging the gap between police and public were discussed at the conference.

They emphasised on the need to improve compliance of the existing legal provisions with the help of all stakeholders.