"Such Bipartisan Support Is Gladdening": PM Modi After Passage Of J&K Bills

PM Modi also praised Amit Shah's speeches in Parliament, saying that anybody who wants a "clearer understanding of the Kashmir issue" must listen to his words. 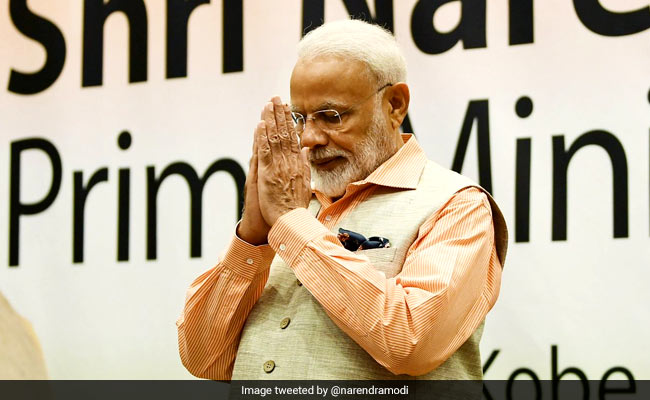 Prime Minister Narendra Modi on Monday thanked lawmakers in both houses of Parliament for passing two legislations on Jammu and Kashmir, and complimented Home Minister Amit Shah for delivering speeches that were both "comprehensive and insightful" in this regard.

"Both Houses of Parliament unanimously passed two important bills pertaining to Jammu and Kashmir. These bills were passed after rich debates, enriched by participation of MPs across party lines. I thank all parties for their support. Such bipartisan support is gladdening," PM Modi said in a tweet.

Union Home Minister Shri @AmitShah's speeches in both Houses of Parliament were comprehensive and insightful. Those who want a clearer understanding of the Kashmir issue must hear his speeches. https://t.co/QM6rbAjk3ehttps://t.co/Jbin3kNl1h

Amit Shah had tabled a legislation for extending President's Rule in the troubled state, besides the Jammu and Kashmir Reservation (Amendment) Bill, in the Rajya Sabha earlier on Monday. The speech he made while introducing them had touched on various topics, including the government's strategy to take on separatists and its efforts to ensure all-round development in Jammu and Kashmir.

Both the legislations were eventually passed, with support from opposition parties such as Naveen Patnaik's Biju Janata Dal and Akhilesh Yadav's Samajwadi Party.

In a separate tweet, PM Modi thanked the lawmakers for paving the way for the Jammu and Kashmir Reservation (Amendment) Bill to become a law. "This will ensure justice for those living in the border areas of Kathua, Samba & Jammu districts. The aspirations of the bright and talented youth of these areas will be fulfilled, which is wonderful for the state and our nation," he said. The legislation was aimed at giving quota benefits in jobs and educational to people living near the state's international border.

Complimenting Amit Shah on his speeches in the upper and lower houses of Parliament, the Prime Minister said that anybody who wants a "clearer understanding of the Kashmir issue" must hear his speeches.

The Home Minister reciprocated by congratulating PM Modi, who he said was committed to bringing the troubled state onto the path to development. "I thank all the parties for supporting these important bills. This yet again reiterates trust in PM Modi's leadership & vision. I congratulate PM @narendramodi on this historic day and I am sure that under his leadership we will soon see a peaceful and progressive Jammu & Kashmir," he tweeted in response.

I thank all the parties for supporting these important bills.

This yet again reiterates trust in PM Modi's leadership & vision.

I congratulate PM @narendramodi on this historic day and I am sure under his leadership we will soon see a peaceful and progressive Jammu & Kashmir.

Amit Shah claimed that the Narendra Modi government has "left no stone unturned" to ensure the peace, prosperity and development of Jammu and Kashmir. "This further strengthens our resolve to ensure JnK's progress," he said.

The Home Minister had also accused successive Congress governments of ignoring the plight of Jammu and Kashmir since Independence in his Rajya Sabha speech. He said that the Narendra Modi government, on the other hand, has launched the process of developing the region and bringing its people into the mainstream.