"Congress Ignored J&K, But We Gave It Power": Amit Shah In Rajya Sabha

The Union Home Minister made these claims while tabling a statutory resolution for extending President's Rule in Jammu and Kashmir, besides the Reservation (Amendment) Bill, in the Rajya Sabha. 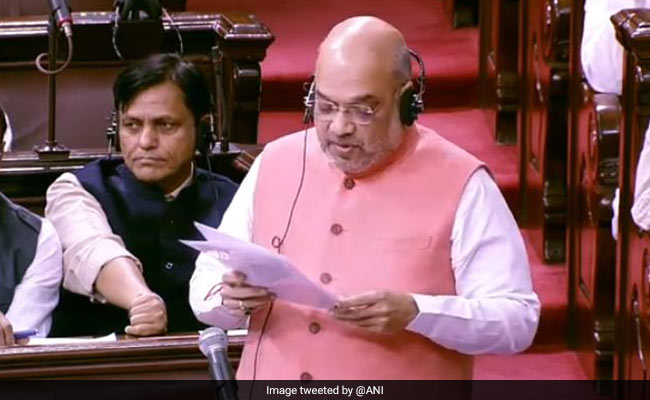 Amit Shah said Kashmir was an integral part of India, and the centre will ensure it stays that way.

Union Home Minister Amit Shah today launched a scathing attack on the way successive Congress governments at the centre had "ignored" the people of Jammu and Kashmir since Independence, and claimed that only the Narendra Modi administration has taken steps to ensure its all-round development.

Mr Shah made these claims while tabling a statutory resolution for extending President's Rule in Jammu and Kashmir, besides the Reservation (Amendment) Bill, in the Rajya Sabha. "The entire population of Jammu and Kashmir remained illiterate under the Congress rule. Did this represent humanity in any way?" he said. "But we, on the other hand, have set up schools in the Valley. We provided electricity and constructed toilets there. We ensured food for the Kashmiri people and implemented welfare schemes too."

Jammu and Kashmir has been under central rule since June 2018, when the BJP ended its alliance with Mehbooba Mufti's Peoples Democratic Party. The statutory resolution was aimed at extending it for another six months, before fresh elections can be held later this year. The Jammu and Kashmir Reservation (Amendment) Bill, on the other hand, proposes to provide quota benefits in jobs and educational institutions to people living near the state's international border.

Mr Shah also alleged that many sections of Jammu and Kashmir's population, including Kashmiri Pandits and members of the Sufi community, were either neglected or persecuted under previous governments. "Why did Kashmiri Pandits leave? Why were Sufis killed when they only spoke of unity?" he questioned. "But we will bring them back, and a time will come when you will be able to see both Kashmiri Pandits and Sufi disciples praying in the same temple."

The Home Minister reiterated that Jammu and Kashmir was an integral part of the country, and the Narendra Modi government would do everything in its power to ensure that it remains that way. "The Narendra Modi government adopts a zero-tolerance policy towards terrorism. The government is committed to Jammu and Kashmir's development. We will move forward in the spirit of Kashmiriyat, Jamhooriyat, Insaniyat," he said, adding that anybody who talks of destroying India will "get a reply in the same language".

He also dismissed allegations that the BJP was responsible for the Jammu and Kashmir assembly elections not being conducted simultaneously with the just-concluded Lok Sabha polls. "Conducting elections is not in my hands -- that's the Election Commission's decision. If it was up to me, I would have conducted the elections tomorrow," Mr Shah said.

The Rajya Sabha later approved the statutory resolution to extend President's rule in Jammu and Kashmir for a period of six months, starting July 3. It also passed the Jammu and Kashmir Reservation (Amendment) Bill-2019.