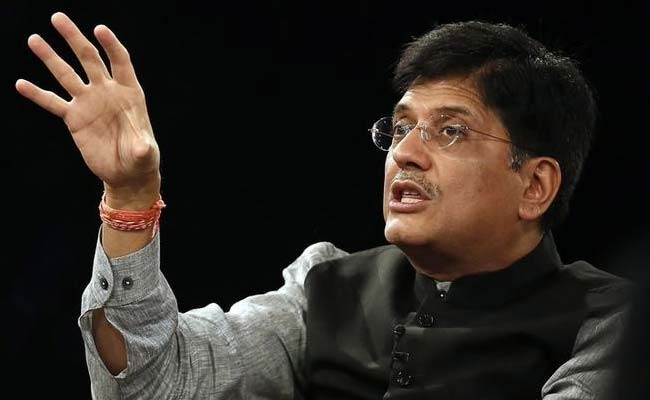 Vadodara: Union Power Minister on Friday sought cooperation from the states to implement various schemes and asked them to expedite the process of mining lease auction as well as the formation of District Minerals Fund.

He asked them to pay up the dues of wind and solar power firms, speaking at a conference of ministers of various states for Power, New and Renewable Energy and Mines in Vadodara.

"Our ministry has taken up the task of intensive electrification. We made a commitment in the past that every household will get connection by the end of 2018. Thus, I urge states to expedite their efforts, as only two years are left," said Mr Goyal, adding that the states must clamp down on illegal power connections too.

"We are making use of satellite technology for faster exploration in mining sector. We have recently completed e-auction of 16 mines. I request all the states to expedite such auctions for minor minerals."

"States also need to fast-track the process of forming DMF....This fund ultimately goes for the welfare of locals and tribals living near mines," he said.

The Union Minister expressed concern over non-payment of dues by states to the wind and solar power generators.

"In the new and renewable energy sector, payment issue is a matter of serious concern. Some of the states are not fulfilling their legal obligation by not paying for power purchased from wind and solar power generating firms."

"We have to pay them, as they are very small companies. In addition, it is also a question of India's credibility."

The two-day conference is a part of 'SWITCH Global Expo' organised by Gujarat government from October 6 to October 10.

Promoted
Listen to the latest songs, only on JioSaavn.com
"Now we have to see why other blocks could not be put for auction. We are here to find those reasons. States are required to put their blocks of minor minerals for auction."

"Our ministry has planned to put 55 new blocks of major minerals for auction this financial year," he said.