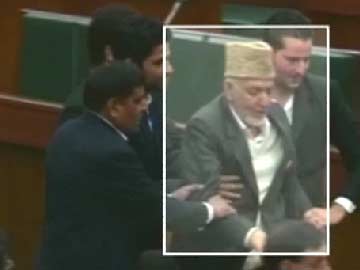 Jammu: The Jammu and Kashmir legislative assembly on Wednesday witnessed an ugly scene when an opposition Peoples Democratic Party (PDP) legislator slapped a marshal of the house.

PDP legislators raised a hue and cry in the assembly on Wednesday alleging that the state government was trying to protect the sexual assault accused former minister against whom a First Information Report (FIR) has been lodged in Srinagar.

While the marshals were removing the legislator, he slapped one of the marshals, creating an ugly scene in the house.

The PDP legislators also raised the issue of non-availability of rations at a camp of Kashmiri Pandit migrants in the city.

Opposition Bharatiya Janata Party (BJP) raised the issue of permanent settlement of refugees who have come to Jammu from Pakistan during the India-Pakistan wars of 1947 and 1965.

Later, both the PDP and the BJP members walked out of the assembly, shouting slogans against the state government.
Comments
Syed Bashir Ahmad