Payback In Mind, BJP Not Acting Against Rebel MP Lawmakers For Now

Despite the two rebel BJP lawmakers declaring that they won't return to the BJP fold, they have not officially joined the Congress until now. 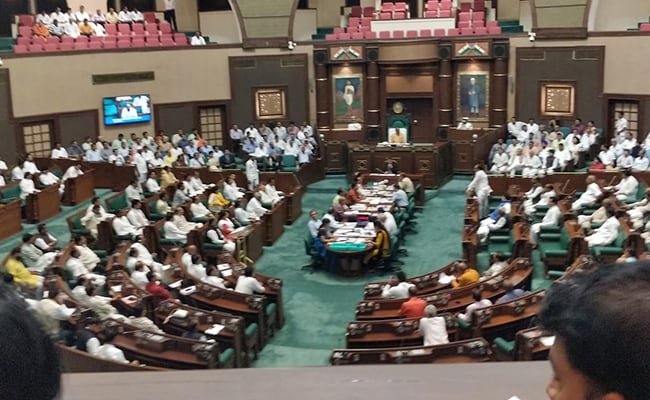 A day has passed since two BJP lawmakers - Narayan Tripathi and Sharad Kol - left the party shell-shocked by voting along with the ruling Congress over the passage of the Criminal Procedure Code (Madhya Pradesh) Amendment Bill in the state assembly, but the party doesn't seem to be in a hurry to act against them. In fact, sources said they plan to adopt a similar tactic against the Congress in the near future.

Despite the two rebel BJP lawmakers declaring that they won't return to the BJP fold, they have not officially joined the Congress until now. Meanwhile, no senior BJP leader was willing to say anything about how they plan to act against the two.

"The situation is totally under control. The lawmakers did not vote in favour of the government, but only in support of a particular bill at a time when the BJP didn't participate in the voting. This drama was orchestrated by the Congress to cover up internal tussles in its own ranks," said BJP chief Rakesh Singh.

The BJP instead plans to scale up its aggression, with Narottam Mishra - the state's former parliamentary affairs minister - dropping enough hints on what the future might hold in store for the ruling party. "Isko Congress nein shuroo kiya hai par hum khatam karenge (This has been started by the Congress, but we will finish it)," he said.

Senior BJP leaders - including former Chief Minister Shivraj Singh Chouhan and state party chief Rakesh Singh - have so far maintained that the party will not try to topple the Kamal Nath government and instead let it fall under the weight of its inherent contradictions. However, sources say that certain party leaders are trying to woo a clutch of disgruntled lawmakers - independents as well as those from the Congress, Bahujan Samaj Party (BSP) and Samajwadi Party - as part of a larger plan that does not have the sanction of either the state or central BJP leadership.

In the crosshairs are Congress lawmakers who swept the Gwalior-Chambal region in the 2018 assembly elections as well as those from the tribal dominated belt of the Malwa-Nimar region. "Efforts to this effect were on during the recent Guru Purnima festival, but the sudden jolt received by the BJP in the Vidhan Sabha on Wednesday may make them halt their plans for a while. But after a few weeks, they may strike again with renewed vigour," a state Congress leader said on the condition of anonymity.

Bhind BSP lawmaker Sanjiv Singh also indicated a similar fear. "At present, the BJP here is like an injured snake that is waiting to lash out with everything it has. I believe the Congress should forget about its allies, and instead concentrate on keeping its own flock intact," he said.

Meanwhile, the ruling Congress claims that it is in touch with five more BJP lawmakers from the Vindhya, Malwa and central Madhya Pradesh region who want to switch. "The number could even touch eight when the time comes," a party leader said.