Parliament Winter Session: Lok Sabha and Rajya Sabha were adjourned indefinitely, bringing an end to the session that saw opposition members protest on issues such as price rise and the Lakhimpur Kheri violence. 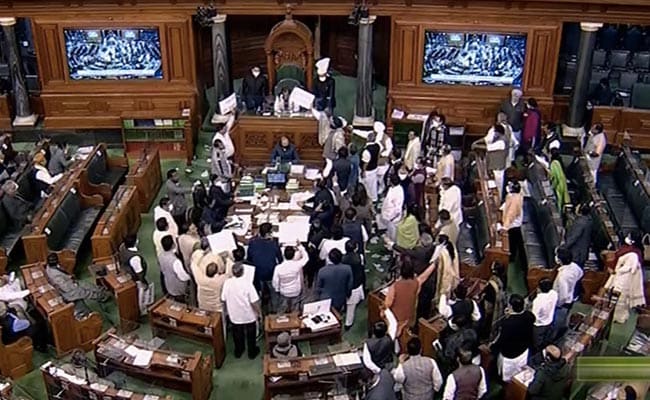 Union Minister Pralhad Joshi lashed out at opposition parties for repeated disruptions during the Winter Session of Parliament that concluded on Wednesday, saying they seem to be "unable to digest" the mandate of 2019.

Lok Sabha and Rajya Sabha were adjourned indefinitely, bringing an end to the session that saw opposition members protest on issues such as price rise and the Lakhimpur Kheri violence.

The parliamentary affairs minister also said the productivity of Lok Sabha was around 82 per cent and that of Rajya Sabha around 48 per cent.

During the session, which began on November 29 and was concluded a day ahead of its scheduled end on December 23, also saw the opposition protesting over the suspension of 12 MPs for their "unruly" conduct in the previous session in August.

"It is unfortunate that despite our efforts and reaching out to the opposition, they created ruckus in the House. It seems that Congress and other opposition parties are unable to digest the mandate of 2019 given by the people," Mr Joshi told a press conference after the session came to a close.

The government has referred six bills to parliamentary committees for greater scrutiny, including the Prohibition of Child Marriage (Amendment) Bill that seeks to override personal laws of different religions, Mr Joshi said.

He also rejected the opposition's charge that adequate time was not granted to them for studying the bills, particularly the Election Laws (Amendment) Bill.

The bill was circulated among members in advance to prepare for an informed debate, the minister said.

During the session, 13 bills - 12 bills in Lok Sabha and one bill in Rajya Sabha - were introduced, while 11 bills were passed by both Houses of Parliament, Mr Joshi said.

He said the Biological Diversity (Amendment) Bill, 2021, was referred to the Joint Committee of both Houses of Parliament and five Bills have been referred to Standing Committees.

Mr Joshi said the Farm Laws Repeal Bill, the Election Laws (Amendment) Bill, legislations to fix the tenure of directors of the Enforcement Directorate and the CBI at five years were among the 11 bills passed by both Houses of Parliament.

The Lok Sabha also passed the Appropriations (No. 5) Bill, granting the government permission to withdraw monies from the Consolidated Fund of India. The bill will be deemed to have been passed by Rajya Sabha after the mandatory 14-day period.