Bharatiya Janata Party leader Pragya Thakur Singh today apologised in the Lok Sabha for "hurting sentiments" with her comments in the Parliament, amid a massive controversy over her calling Nathuram Godse a patriot. However, she told the parliament that her comments were "distorted" by the opposition.

The 49-year-old lawmaker also alleged that she had been called a terrorist by an MP though there was no evidence against her. Pragya Thakur was referring to Congress MP Rahul Gandhi, who had yesterday said: "Terrorist Pragya calls terrorist Godse, a patriot. A sad day in the history of India's parliament."

BJP members cried "shame" at Congress MPs across the house and demanded an apology from Rahul Gandhi. Stung by her aggressive statement, the opposition said her apology was not good enough and shouted slogans of "Down, down Godse" and "Long live Mahatma Gandhi".

The winter session of parliament will today consider some bills for discussion and passing. They include Taxation Laws (Amendment) Bill, 2019. Finance Minister Nirmala Sitharaman is scheduled to move that the bill further to amend the Income Tax Act, 1961, and to amend the Finance Act, 2019, be taken into consideration. A speech by Law and Information Technology Minister Ravi Shankar Prasad on the Pegasus spyware is also likely to come up.

Here are the live updates from Parliament winter session:

Nov 29, 2019 14:59 (IST)
Pragya Thakur apologises in Lok Sabha, again
"I have tolerated a lot of attacks from my enemies... During a discussion on SPG security cover in the Lok Sabha on November 27, I did not call Nathuram Godse a terrorist. But still if someone's sentiments were hurt, I apologise," the BJP MP says.
Nov 29, 2019 13:25 (IST)
Have cleared my position: Rahul Gandhi amid Godse row
Congress leader Rahul Gandhi, after BJP's demands of a Privilege Motion for calling Pragya Thakur a terrorist, says: "They can do whatever they want to. I have cleared my position."
Nov 29, 2019 13:10 (IST)
Lok Sabha Speaker calls meeting of floor leaders
Lok Sabha Speaker Om Birla has called a meeting of floor leaders of different political parties to end the row over BJP MP Pragya Thakur's remarks on Nathuram Godse.
The Lok Sabha was then adjourned till 2:30pm.
Nov 29, 2019 13:07 (IST)
Should categorically say Nathuram Godse is a terrorist: Asaduddin Owaisi
AIMIM leader Asaduddin Owaisi in the Lok Sabha says that the Speaker had claimed that the remarks by BJP's Pragya Thakur are not in records.
"It's an egregious breach, goes against basic standard of conduct of a member. The member should categorically say that Nathuram Godse isn't a 'deshbhakt', he's a terrorist and a murderer of Mahatma Gandhi," he adds.
Nov 29, 2019 13:03 (IST)
Trinamool leader Sudip Bandhopadhyay in Lok Sabha says Pragya Thakur should tender an unconditional apology.
Nov 29, 2019 12:58 (IST)
Youth Congress workers protest against Pragya Thakur
Youth Congress workers dressed as Mahatma Gandhi protest against BJP MP Pragya Thakur over her remark referring to Nathuram Godse as a patriot in the Parliament.

Nov 29, 2019 12:48 (IST)
Want unqualified apology from Pragya Thakur: Congress
Uproar continues in the Lok Sabha after statement by BJP MP Pragya Singh Thakur over her remark, reportedly referring to Nathuram Godse as "deshbhakt" in the House. Leader of Congress in Lok Sabha, Adhir Ranjan Chowdhury says: "We just have one demand, we want unqualified apology."
Nov 29, 2019 12:38 (IST)
Should not politicise issue: Lok Sabha Speaker amid Godse row
Lok Sabha Speaker Om Birla: "This House doesn't permit to glorify the matter of assassination of Mahatma Gandhi whether in this House or outside. Yesterday, the Defence Minister gave the clarification on behalf of the government. The MP (Pragya Singh Thakur) has apologised too."
Not only this nation but the world follows principles of Mahatma Gandhi, the Speaker adds. "We shouldn't politicise this issue. If we do, it'll be before the world. So I said that the remarks won't be recorded."
Nov 29, 2019 12:32 (IST)
Rahul Gandhi should apologise to Pragya Thakur: BJP
A BJP leader in the parliament has said that Congress leader Rahul Gandhi should apologise for calling Pragya Thakur a "terrorist".
BJP MP Nishikant Dubey demands privilege motion against Rahul Gandhi.
"Calling a woman a terrorist is worse than the murder of the Mahatma," says Nishikant Dube.
He says the Congress has made a government with the Shiv Sena in Maharashtra. "The Shiv Sena called Nathuram Godse a patriot in its mouthpiece 'Saamana'. For power and greed, the Congress can cross any boundaries."
On Thursday, Rahul Gandhi had tweeted: "Terrorist Pragya calls terrorist Godse, a patriot. A sad day, in the history of India's Parliament."

"Calling a woman and Member of Parliament, a terrorist is even worse than the murder of Mahatma Gandhi," says BJP's Nishikant Dubey in Lok Sabha. pic.twitter.com/afhMS9NRbm 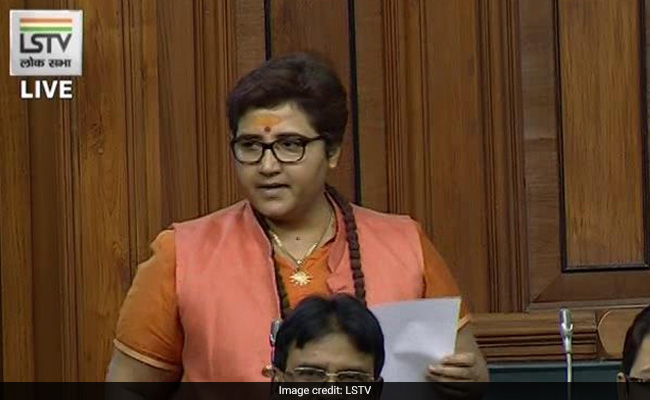 #WATCH "I apologise If I have hurt any sentiments. My statements being distorted, taken out of context. A member of the House referred to me as 'terrorist' without proof. It is an attack on my dignity," BJP MP Pragya Singh Thakur in Lok Sabha pic.twitter.com/2cYY87uoid

Nov 29, 2019 12:17 (IST)
Remarks were misconstrued: Pragya Thakur apologises in Parliament
BJP leader Pragya Thakur apologises over her remarks on Nathuram Godse in the Lok Sabha.
"I apologise If I have hurt any sentiments."
To call me a terrorist is against the law, she says. "A member of the House refereed to me as 'terrorist'. It is an attack on my dignity. No charges against me have been proven in court."
Ms Thakur, a first-time MP, had said that Nathuram Godse, the assassin of Mahatma Gandhi, was a "patriot", drawing severe criticism from the Congress and even senior BJP leaders like JP Nadda and Rajnath Singh.