Parliament Session LIVE: Parliamentarians who made a statement on increasing air pollution on the first day of winter session were BJP's Mansukh Mandaviya and Manoj Tiwari.

As the winter session of parliament enters second day today, air pollution is being discussed in the Lok Sabha. This comes as the air quality in Delhi remains in "very unhealthy" category. On Day 1 of the parliament winter session, Union Environment Minister Prakash Javadekar reached parliament on an electric car, urging people to use electric vehicles and public transport to curb air pollution. "I am the environment minister.... this is the least I can do," he told reporters. "The government is providing subsidy on electrical vehicles... so people should use it," he added.

Among other MPs who made a statement on increasing air pollution on the first day of winter session were BJP MP Mansukh Mandaviya and his party colleague Manoj Tiwari. Both the MPs reached parliament riding a bicycle.

Here are the LIVE updates of the winter session of parliament:

Raising the issue during Zero Hour, Trinamool Congress's Saugata Roy, Congress's TN Prathapan and Kunwar Danish Ali of the BSP accused the government of using force to suppress the voice of students.

Mr Roy dubbed the use of force on students as "unfortunate", saying the hike should be rolled back as poor students will find it difficult to pay the amount.

Mr Prathpan said the students are protesting for their rights. "The government is undemocratically suppressing their voice against fee hike. The government is ruining higher education institutions," he said.

He also demanded a high-level probe into the "atrocities" committed against students of the university.

Kunwar Danish Ali too demanded a probe into the lathi-charge and sought an "apology" from the government.

But Speaker Om Birla did not allow him to speak further as his Zero Hour notice was on another issue, reported news agency PTI.
Nov 19, 2019 15:50 (IST)
Parliament Winter Session: Lok Sabha Speaker takes note of Rahul Gandhi's absence
Taking note of Congress leader Rahul Gandhi's absence from the House, Lok Sabha Speaker Om Birla on Tuesday said he had wanted to give a chance to the former Congress president during Question Hour.

"His question was listed for the Question Hour and I wanted to give him a chance had he been present," Mr Birla remarked when K Suresh got up to speak during Zero Hour from Mr Gandhi's seat. The Speaker then asked Mr Suresh to move to his designated seat and continue.

As per the Lok Sabha schedule, question number 28 was listed against the name of Rahul Gandhi. The question pertained to Pradhan Mantri Gram Sadak Yojana for Kerala.

Question numbers 21 to 25 were taken up during the Question Hour, reported news agency PTI.
Nov 19, 2019 14:05 (IST)
Parliament Session: Lok Sabha adjourned for lunch
Lok Sabha adjourned till 3 pm for lunch.
Nov 19, 2019 13:19 (IST)
Parliament Winter Session: Adhir Ranjan Chowdhury criticises government over withdrawal of SPG cover
Congress leader Adhir Ranjan Chowdhury in the Lok Sabha said, "Sonia Gandhi ji & Rahul Gandhi ji are not normal protectees. Vajpayee ji had allowed SPG protection for the Gandhi family. From 1991-2019, NDA came to power twice but their SPG cover was never removed." The congress is protesting in both Houses over the withdrawal of SPG cover of the Gandhi family, reported news agency ANI.
Nov 19, 2019 13:15 (IST)
Parliament Winter Session: Trinamool Congress MP requested government for gender neutral toilets
Trinamool Congress MP Pratima Mondal in Lok Sabha said, "Toilets are a basic necessity. Use of public toilets is one of the most common things but it isn't easy for transgender / people belonging to the 3rd gender. Finding gender neutral toilets in India is next to impossible. Request government to provide infrastructure for it," news agency ANI reported.
Nov 19, 2019 12:44 (IST)
Parliament Session Live: Derek O' Brien says opposition deprived of raising important issues in the House
Trinamool Congress leader and Rajya Sabha Member Derek O' Brien tweeted that the opposition could not raise important questions in the Zero Hour and couldn't seek accountability from ministers since the Upper House was adjourned till 2 pm. He also said that the opposition never protested inside the Well of the House.

Not a single MP from Opposition went into the Well of the Rajya Sabha. Yet, House was adjourned within minutes right till 2 pm. Oppn deprived of raising imp issues in Zero Hour & holding ministers accountable in Question Hour. #Parliament When you don't have answers, u run away

The portrait of the former prime minister was garlanded and leaders across party lines paid floral tributes to the late leader. Earlier today, Sonia Gandhi and Manmohan Singh also paid their respects at the Indira Gandhi Memorial where a gathering was organised.

Nov 19, 2019 11:46 (IST)
Lok Sabha Speaker Om Birla warns opposition against protests in the Well of the House
Om Birla warns members against protests inside the Well. The Congress is protesting inside the Well of the House against withdrawal of SPG cover of the Gandhi family and police action on JNU students who are protesting against a massive hike in hostel fees, dress code and curfew timings.
Nov 19, 2019 11:33 (IST)
Congress moves adjournment motion in Lok Sabha over withdrawal of SPG cover of Gandhi family
The Congress has given a notice to move an adjournment motion in the Lok Sabha against the withdrawal of Special Protection Group (SPG) cover of the Gandhi family, reported news agency PTI.

Describing the move as "arbitrary", the Congress in the notice said the security cover was withdrawn ignoring the existing and probable threats to the Gandhi family.

An adjournment motion is moved to stop the proceedings of the House to take up the issue raised in the motion.

On Monday, the first day of the Winter Session, Congress leader in Lok Sabha Adhir Ranjan Chowdhury had raised the issue of SPG security, saying the move to withdraw the cover of Sonia Gandhi and former president Rahul Gandhi was "arbitrary".

The government earlier this replaced the SPG security cover given to the family of former prime minister Rajiv Gandhi, who was assassinated by on May 21, 1991, by the ''Z-plus'' security provided by the CRPF.
Nov 19, 2019 11:30 (IST)
Winter Session Of Parliament: Air pollution, Chit Fund Amendment Bill to be discussed in Lok Sabha today
Lok Sabha to take up Chit Fund Amendment Bill today for discussion. Air pollution and climate change will also be discussed under Rule 193
Nov 19, 2019 11:25 (IST)
Parliament Winter Session: Rajya Sabha adjourned till 2 PM
Rajya Sabha proceedings have been adjourned till 2 pm today after opposition uproar over alleged police action on protesting JNU students in the national capital and detention of political leaders in Jammu and Kashmir, reported news agency PTI. Soon after the House met for the day, Left and other opposition party members raised the two issues.

At least 50 JNU students were detained and some were injured when police allegedly baton-charged protesters as they marched towards Parliament on Monday demanding a total rollback of the hostel fee hike.

Chairman M Venkaiah Naidu said the adjournment notices received from members do not warrant setting aside the listed businesses of the day. "You will be disturbing the entire House. That is not a matter to adjourn business," he said and warned members that he would be forced to adjourn proceedings if they continued their protests. But the members were unrelenting and continued to raise the issues from their seats.

Venkaiah Naidu called for Zero Hour mentions but with opposition members unrelenting, he adjourned the proceedings till 2 pm.

Earlier, the House mourned the death of former Zimbabwean President Robert Mugabe, who Mr Naidu described as a "true friend of India" and one of the tallest world leaders.
Nov 19, 2019 11:24 (IST)
Parliament Session Live: Venkaiah Naidu says will revisit the new uniforms of marshals 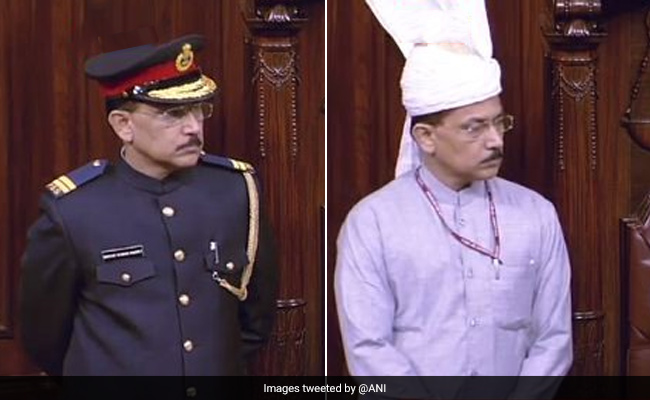 The Rajya Sabha Marshals attended the first day of the winter session of the parliament yesterday in a new uniform. After a lot of criticism from under Marshal law, House Chairman and Vice President M Venkaiah Naidu has asked his secretariat to revisit the uniforms given to the marshals.
Winter Session of ParliamentParliament Winter SessionParliament