The opposition parties say in its current form, the proposed law could be misused to harass Muslims and wanted it to be reviewed by a parliamentary committee. 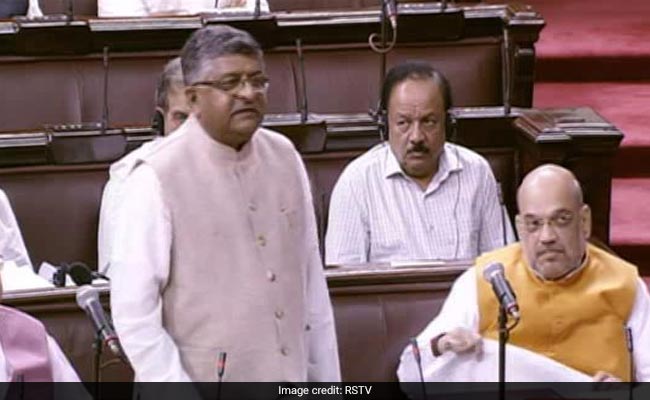 The Upper House passed the bill by 99 votes in favour and 84 against it.

Parliament today passed the Muslim Women (Protection of Rights on Marriage) Bill, 2019. The upper house earlier rejected the motion to send the contentious triple talaq bill - that makes instant triple talaq a criminal offence - to select committee for further scrutiny. The passage of the bill was supported by a non-aligned Biju Janata Dal, while National Democratic Alliance members Janata Dal United and the AIADMK walked out.

The Upper House passed the bill by 99 votes in favour and 84 against it.

The bill to ban Triple Talaq - the practice of Muslim men instantly divorcing their wives by uttering "talaq" thrice - which failed the the Rajya Sabha test last time, was passed by Lok Sabha last week. The Triple Talaq bill could not make it through the Upper House earlier this year during the first term of Prime Minister Narendra Modi's government, although it was passed by Lok Sabha.

With Rajya Sabha now approving the bill, the practice of instant divorce by Muslim men will be punishable by jail term of up to three years. Once granted assent by the President, the bill will replace an ordinance promulgated last on February 21 to the same effect as the bill.

Law Minister Ravi Shankar Prasad said the bill is about "gender justice, dignity and equality" as he tabled the bill in Rajya Sabha today. To Leader of the Opposition Ghulam Nabi Azad, who termed the bill as a politically motivated move to destroy Muslim households with domestic fights, the minister said the Congress leader should think of why his party could never win majority following the peak of 400-plus seats it won in 1984.

The opposition parties say in its current form, the proposed law could be misused to harass Muslims and wanted it to be reviewed by a parliamentary committee.

Here are the highlights on the Parliament session:

Today is a great day for India's democracy.

I congratulate PM @narendramodi ji for fulfilling his commitment and ensuring a law to ban Triple Talaq, which will free Muslim women from the curse of this regressive practice.

I thank all parties who supported this historic bill.

Indeed a victory for millions of Muslim women. Grateful thanks @narendramodi ji for leading this social revolution from the front. A true testimony to 'Sabka Saath, Sabka Vikas, Sabka Vishwas' 🙏 https://t.co/85FVGqLb5A

The floor management of the BJP/NDA in the Rajya Sabha is quite something. So much for the treasury side not having the numbers in the upper house! I'd be amazed if there is a single piece of legislation the Government will struggle with in the Rajya Sabha. https://t.co/qMEXOuxaBu

Fail to understand the need to pass the triple talaq bill especially since the Supreme Court had already declared it illegal. Undue interference seemingly to punish Muslims. Given the current state of the economy, should this really have been a priority?

An archaic and medieval practice has finally been confined to the dustbin of history!

Parliament abolishes Triple Talaq and corrects a historical wrong done to Muslim women. This is a victory of gender justice and will further equality in society.

A historic day when the Rajya Sabha passed the #TripleTalaq Bill, earlier passed by Lok Sabha.
Govt of PM @narendramodi has fulfilled its commitment by giving justice to Muslim women.
No more Talaq-Talaq-Talaq!https://t.co/KwNL7OhbJP

Union Minister of Law & Justice Ravi Shankar Prasad: Today is a historic day. Both the Houses have given justice to the Muslim women. This is the beginning of a transforming India. #TripleTalaqBillpic.twitter.com/rXwPsfAtBF

Minister of Law & Justice Ravi Shankar Prasad, in Rajya Sabha: In 1986 you rose to 400, Shah Bano's case happened in 1986 & you never received a majority after that. I am giving you a food for thought. https://t.co/LIq2ZmP7Xa

Ghulam Nabi Azad, Leader of Opposition in Rajya Sabha, on Triple Talaq Bill: When they will come out of jail they will either commit suicide or become dacoits and thieves, that is the intention of your bill. https://t.co/H0fJ7r9UAP

Ghulam Nabi Azad, Leader of Opposition in Rajya Sabha, on Triple Talaq Bill: The Bill is for protection of rights on marriage but the real motive is destruction of families. pic.twitter.com/GWQTtdTEYn

Watch | "Supreme Court has already declared #tripletalaq illegal... How can you bring a law for a law that has been already been struck down by court?": Congress's Amee Yajnik 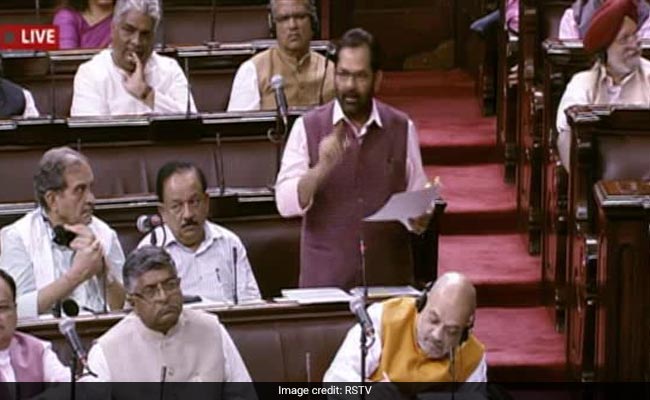 Jul 30, 2019 12:37 (IST)
NCP leader Majid Memon to NDTV on Triple Talaq Bill:"We want that the provision of three-year jail term should be removed in the bill.  The bill should be sent to select committee for review."
Jul 30, 2019 12:34 (IST)
Last Friday, as many as 17 opposition parties wrote to Rajya Sabha chairman Venkaiah Naidu to express anguish over the "hurried" passage of bills in parliament in this session with little or no scrutiny.
Jul 30, 2019 12:26 (IST)
"Triple Talaq Bill talks of women from only one community.... Empower women in the right manner. Give them social and economic empowerment too.": Congress's Amee Yajnik In Rajya Sabha
Jul 30, 2019 12:23 (IST)

"Why is this government not worried about all women of the country?": Amee Yajnik, Congress lawmaker, on the #TripleTalaqBill

Jul 30, 2019 12:20 (IST)
"Philosophy Behind Law Is Justice": Congress's Amee Yajnik
Congress's Amee Yajnik, raising objections against the Triple Talaq Bill in Rajya Sabha today, said: "The philosophy behind law is justice... there's no point behind a legislation if the end result is not dignity. Under this legislation, a woman will have to sit in the line of accused... Most matters concerning women are in family courts. But under this bill, the women will have to go to a magistrate court."
Jul 30, 2019 12:07 (IST)
We have ensured the provision of bail in Triple Talaq bill.... Let's not politicise the matter... This is a matter of gender justice: Law Minister Ravi Shankar Prasad
Jul 30, 2019 12:06 (IST)
Union Minister Ravi Shankar Prasad tables Triple Talaq bill in Rajya Sabha
Jul 30, 2019 11:39 (IST)
Congress, BJP Spar Over Unnao Rape Case In Lok Sabha
On Unnao rape case, Congress's Adhir Ranjan Chowdhury told the Lok Sabha: "We demand that Home Minister comes to the House and gives a statement. What kind of a society are we talking about, where such an incident (accident of Unnao rape case survivor in Raebareli) has happened.
Amid uproar,  Union Parliamentary Affairs Minister, Pralhad Joshi Pralhad Joshi in Lok Sabha said the matter should "not be politicised".
"CBI inquiry is already underway, FIR has been registered. Government is investigating with impartiality," news agency ANI quoted him as saying.
Jul 30, 2019 11:25 (IST)
Speaking to NDTV,  Trinamool Congress lawmaker Mahua Moitra, outside the parliament, said "Unnao rape case is shameful".
"The BJP lawmaker is in the jail but he is still influencing the case. Yogi Adityanath government is answerable. Sengar's relatives are threatening the family of rape survivor. Is this a government of killers?"
Jul 30, 2019 11:17 (IST)
"Save The Daughter Of Unnao": Opposition Raises Slogan In Lok Sabha
The Lok Sabha witnessed uproar and sloganeering over the Unnao rape case. The teen who was raped in 2017, allegedly by BJP legislator Kuldeep Sengar, is critical after she met with an accident on Sunday. Two women, the teen's aunts, died in the car crash and her laywer was injured. The opposition raised slogan in the house: "
Jul 30, 2019 11:01 (IST)
The Triple Talaq Bill will be tabled after 12 pm, Union Minister Ravi Shankar Prasad was quoted as saying by news agency ANI.
Jul 30, 2019 10:47 (IST)
The BJP is holding a parliamentary party meeting this morning.

Castes Panel Seeks Action Against Those Responsible For Singhu Murder