Parents Cling To Baby's Body And Weep In UP Hospital, Blame Doctors

In a 12-second mobile video, Prem Chand is prone on the ground with the tiny body and his wife is at a distance - both crying

Doctors and officials of the district have denied any negligence.

Young parents cling to the body of their one-year-old baby boy and weep inconsolably inside a government hospital complex in extremely distressing visuals that have emerged from Uttar Pradesh's Kannauj town, 123 km from state capital Lucknow. The couple had rushed the baby to the hospital with a fever and a swollen neck, but they allege doctors refused to touch their son, instead asking the couple to take their child to Kanpur, around 90 km away, that has bigger and more specialised government hospitals.

Doctors at the hospital and the Kannauj district administration have denied this on record. 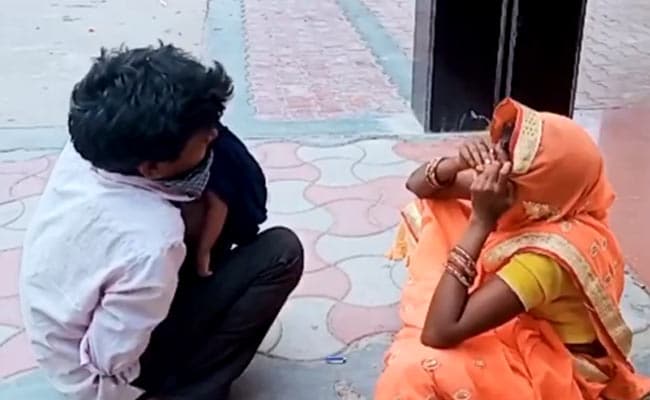 In a 12-second mobile video, Prem Chand is prone on the ground with the tiny body and his wife is at a distance - both crying . Another clip, reportedly shot a while earlier, shows the child on a bed in the emergency ward of the hospital being examined by a doctor.

"That examination only happened once some people started filming us on their phones. Before that, no doctor was willing to touch my child. We were there for 30 minutes. They kept on saying 'take him to Kanpur'. I am a poor person. I have no money. What could I have done," Prem Chand, back in his village today, questioned.

"His neck was swollen. They kept us waiting for 30-40 minutes. Then he was admitted but he died," Asha Devi, the mother, said, breaking down.

Doctors and officials of the district have denied any negligence. "The boy was brought to the hospital at 4.15 pm yesterday evening. The child was admitted to the emergency ward. The case was very serious but a child specialist was called to the emergency ward but in a space of 30 minutes he died . The doctors say they tried their best but the child could not be saved. Prima facie it does not seem there was any negligence," Rajesh Kumar Mishra, a top government official in Kannauj, told the media.

Taking the suo motu cognisance of the media report regarding the incident, the National Human Rights Commission (NHRC) has issued a notice to the Chief Secretary of Uttar Pradesh.

The NHRC has called for a detailed report in the matter, within four weeks including the action taken against the doctors/officials of the hospital concerned and status of any relief given to the family of the child by the state government, news agency ANI reported.