The Maharashtra Chief Minister also spoke about the importance of the "four pillars of Democracy" - judiciary, executive, legislature, and media - working together. 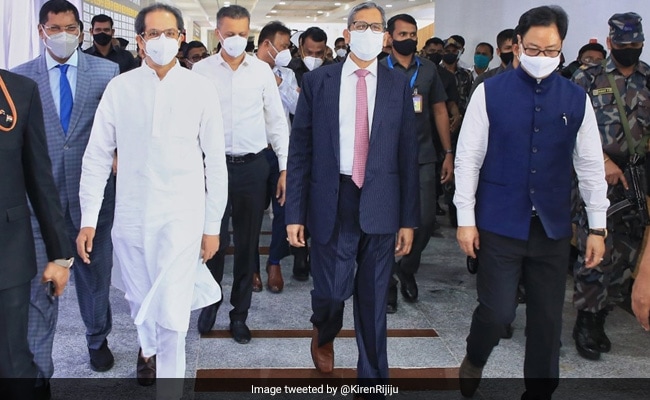 Uddhav Thackeray at the inauguration of the High Court Annexe Building in Aurangabad.

Maharashtra Chief Minister Uddhav Thackeray took a dig at former Mumbai top cop Param Bir Singh at a judiciary event in the state on Saturday. "Justice DY Chandrachud pointed to a case where the accused is absconding since 1958. But in this state, we have a complainant who is missing," he said, taking a dig at Mr Singh who is suspected to have fled the country after corruption charges were made against him.

Mr Thackeray was speaking at the inauguration event of two new wings at the High Court Annexe building of the Sambhajinagar-Aurangabad Bench of the Bombay High Court in Maharashtra. Union Law Minister Kiren Rijiju, Chief Justice of India NV Ramana, and other senior judges of the Supreme Court were also present on stage.

Justice DY Chandrachud shared an anecdote in his speech to highlight the matter of several cases pending for years. "In the Sangola Taluka in Maharashtra, there is a case where the accused has been absconding since 1958. God knows whether the accused is even around now or not," he said.

Mr Thackeray then hinted at former Mumbai top cop Param Bir Singh's case without naming him. "Justice DY Chandrachud pointed to a case where the accused is absconding since 1958. But in this state, we have a complainant who is missing. He complained and is now missing. This is something that needs to be looked into," he said.

Mr Singh was replaced as Mumbai Police Commissioner over "unforgivable" lapses in the Mukesh Ambani security scare probe in March. He then made some explosive allegations of corruption and interference with police work against ex-Maharashtra Home Minister Anil Deshmukh, plunging the Uddhav Thackeray government into a crisis. He had said that Mr Deshmukh had asked several of his officers to collect money from restaurants, pubs, bars, and hookah parlours, setting them a target of Rs. 100 crores every month as recently as February this year.

Mr Deshmukh, however, had denied any wrongdoing but resigned as the state's Home Minister.

The Maharashtra Chief Minister also spoke about the importance of the "four pillars of Democracy" - judiciary, executive, legislature, and media - working together. "There is pressure on the democracy due to pressure on the pillar of the judiciary. People want justice and even if one of the pillars collapses, democracy will collapse and then any number of pillars will not work. But I am sure our pillars are strong enough to not collapse," he said.

At the event, Mr Rijiju appreciated the coming together of the Centre and the Maharashtra government for the cause of the judiciary. "Politics is the essence of democracy, but when it comes to Judiciary, there is no politics. Former CM (Chief Minister) Devendra Fadnavis laid the foundation for this building and today, the present CM Thackeray is laying the foundation. This is the team spirit and teamwork and we will continue to work in this manner," he said.