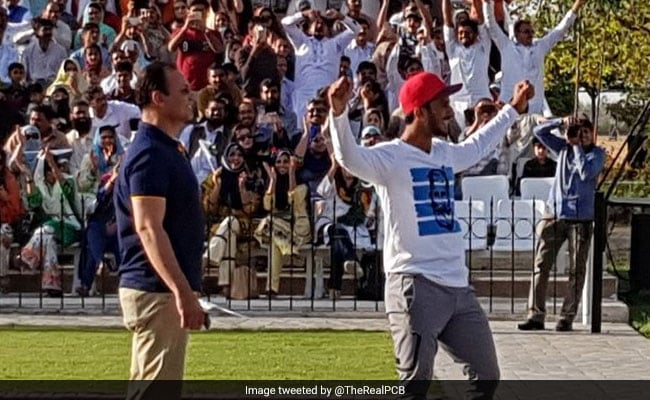 New Delhi: Hasan Ali, the medium pacer from Pakistan, became talk of the Twitter after a crazy show of his wicket taking gesture at the Wagah Border on Saturday.

The Pakistan cricket team was visiting the Wagah Border to watch the flag lowering ceremony after their training camp before leaving for England.

The Pakistan cricket board tweeted a picture of the team visiting the historic site.

As crowds cheered on the Pakistani side, Hasan Ali, showed off his signature move. A video which has gone viral on social media shows the roughly 40-second act of the Pakistani cricketer, doing his popular act, to celebrate wicket taking on the field.

Sources in the Border Security Force (BSF) have told NDTV that "Hasan Ali was about 30 metres away from the border, well within the Pakistani territory". However, the primary border guarding forceof India has lodged a protest with the Pakistani Rangers.

Every evening, the lowering of the flags ceremony at the Wagah border, by the BSF on the Indian side and Pakistani rangers on the other side, has been a traditional practice since 1959.

The Pakistani cricketer's act did not go down well with many on Twitter.

Pakistan is set leave for England on Sunday, for a two-match test series on May 24 and June 1. The team will also take on Ireland for a for a single Test match on May 11.
Comments
Hasan Ali KhanWagah Border Ceremony

Election Commission Allows Use Of Indelible Ink On Quarantined People