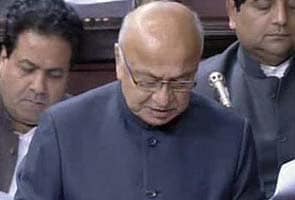 New Delhi: Home Minister Sushil Kumar Shinde on Monday said Pakistan has been misleading India on the arrest of Mumbai terror attack mastermind Hafiz Saeed, and added that all his arrests so far have pertained to other matters.

Making a statement in the Rajya Sabha a day after Pakistan's Interior Minister Rehman Malik concluded his three-day visit to India, Mr Shinde said copies of FIRs and judgments pertaining to previous arrests of Saeed were made available to India which showed he had not been arrested in relation to the Mumbai attacks.

"Mr. Rehman Malik has been telling us repeatedly he has arrested Hafiz Saeed thrice and he was let off due to lack of evidence. We had been given to understand Hafiz Saeed was arrested on charge of being involved in the 26/11 attack," Mr Shinde said.

"He said he will give FIRs and judgments of three occasions... He has given us papers on detention of Saeed and from the papers it is clear his detention was for other reasons and not for his role in Mumbai terror attack. So I can only say Mr. Rehman Malik appears to be misinformed in this case," he said.

Saeed is the founder of Lashkar-e-Taiba and mastermind of Mumbai terror attack of 2008.

"I made it clear, key issue in mind of Indian public is to bring perpetrators of 26/11 to justice. I specially mentioned our investigation shown Hafiz Saeed was mastermind and Pakistan is still to take actions," Mr Shinde said.

Promoted
Listen to the latest songs, only on JioSaavn.com
Mr Malik, during his visit, had said the Pakistan government had arrested Saeed thrice after India's allegations against him, but on all occasions he was let off by the court due to lack of evidence.

"I said the insufficient information you have given, which you call evidence, will not stand the test of our courts and the (Lahore) High Court bailed him (Saeed) out. Our courts have given bail to Hafiz Saeed and said not to arrest him because there is not sufficient evidence against him," Mr Malik had said.