P Chidambaram, who has been in CBI custody since last week, has denied any wrongdoing in the INX Media case. 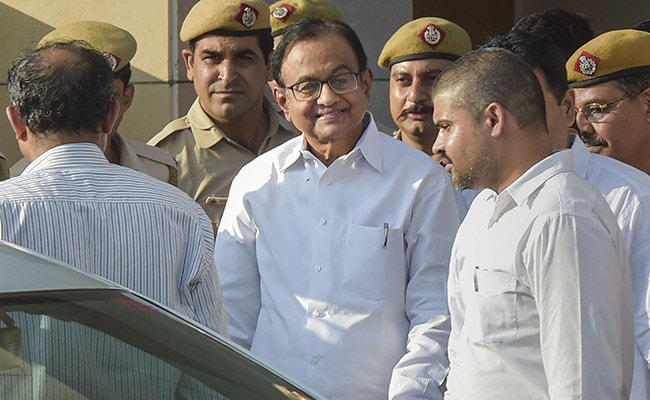 P Chidambaram has been accused of facilitating a huge infusion of foreign funds in INX Media.

In an unprecedented offer to the Supreme Court on Thursday, former Finance Minister P Chidambaram said he was willing to remain in custody of the Central Bureau of Investigation or CBI till Monday in the INX Media corruption case. Dramatically arrested from his home last week, Mr Chidambaram is in CBI custody till today and will be produced before a trial court when it expires.

The offer was made after Justices R Banumathi and A S Bopanna said they would hear Mr Chidambaram's plea on September 2 or Monday in which he has challenged the trial court for sending him to CBI custody. Today, if the CBI court turns down the investigating agency's request for sending him back to its custody, the former union minister may be sent to Delhi's Tihar jail.

The judges, who did not comment on the offer, said they would announce their decision on September 5 on Mr Chidambaram's plea challenging the Delhi High Court's August 20 verdict denying him anticipatory bail plea in the INX Media money laundering case filed by the Enforcement Directorate or ED.

The court also extended the interim protection from arrest granted to Mr Chidambaram till September 5. Mr Chidambaram, in his plea, has sought anticipatory bail in the money laundering case.

Senior advocates Kapil Sibal and Abhishek Manu Singhvi, appearing for Mr Chidambaram, told the court that since the plea challenging the remand orders is listed on September 2, Mr Chidambaram is offering to remain in CBI's custody till then.

Solicitor General Tushar Mehta opposed the submission, saying extension of the custody can only be done by the trial court as the case is pending there.

"If the same offer is made before the trial court tomorrow, then we may have no objection to it," Mr Mehta said.

He also told the court that the ED needed to interrogate Mr Chidambaram in custody without the "protective umbrella" of anticipatory bail.

"I have materials to show that laundering of money continued after 2009 and even till date (in the INX Media case)," he said, countering arguments advanced by Mr Chidambaram's lawyers that the agency cannot charge him for an offence with retrospective effect.

Mr Sibal, on other hand, challenged the ED to show any one bank account or any one property, which he had not shown in returns or declared publicly as a member of parliament.

Mr Chidambaram has been accused of facilitating a huge infusion of foreign funds into the media company INX Media in 2007, when he was Finance Minister, at the instance of his son Karti Chidambaram, who allegedly received kickbacks for his role. Karti Chidambaram -- also named in the case - is out on bail.

Mr Chidambaram has denied any wrongdoing and claimed he does not have to be questioned in custody as he has answered all the questions asked so far.